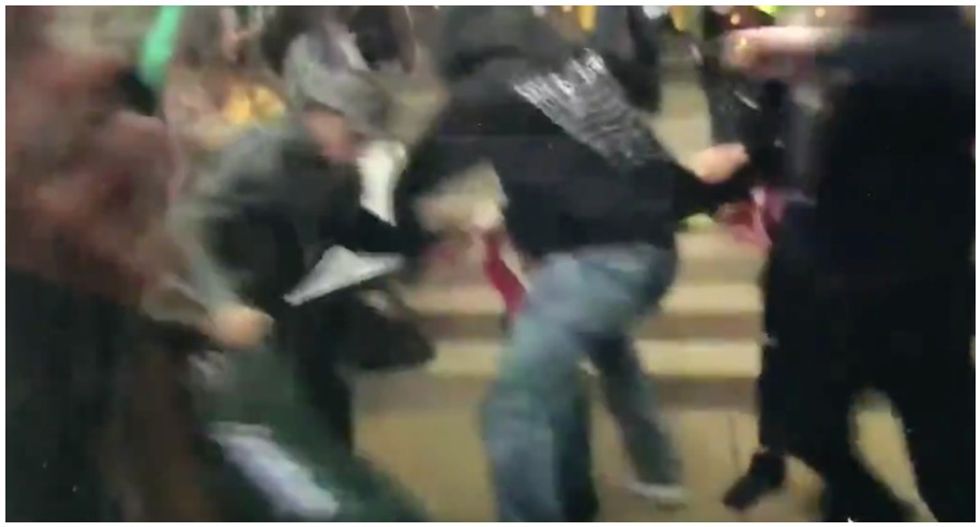 Tensions are mounting among protesters at the Michigan State Capitol as disagreements about protest messaging pop up. In one particular incident reported by The Detroit News, two protesters fought over a display featuring a doll with a noose around its neck and the American flag.

According to protester Katie Rogowicz, the noose display was objected to because it someone thought it falsely portrayed the protesters as violent. One person snatched the flag away from the display and was pushed to the ground when the person behind the display tried to retrieve it.

Another protester had an ax that was confiscated by law enforcement, The Detroit News reports.

Video taken from the @FOX17 facebook live this morning of the Michigan United for Liberty protests at the Capitol i… https://t.co/sp7fIXMSqY
— Sarah Grimmer (@Sarah Grimmer) 1589466898.0

Read the full report over at The Detroit News.

One reporter sent out an urgent warning after former President Donald Trump posted what may be his most bizarre, QAnon-related, and conspiracy-laden video yet on his Truth Social platform.

The video was "re-truthed" by Trump on Thursday evening, and as The Daily Beast political reporter Will Sommer noted, the imagery was "filled with overt QAnon memes," and that the former president was really "stepping his QAnon outreach."

A man who has fled his home country of Russia this week delivered a scathing portrait of Russian President Vladimir Putin's leadership in an interview with The Atlantic.

The man in question, a 38-year-old IT manager named Anton Shalaev, escaped from Russia this week to the Armenian capitol of Yerevan, which is one of the few places that will still allow Russians into the country.

‘Depraved’: Rick Scott’s NRSC slammed over fundraiser asking GOP voters ‘Where do you want to send illegal immigrants next?’

U.S. Senator Rick Scott (R-FL) and his NRSC are once again under fire, this time for sending fundraising emails to GOP voters asking, "where do you want Republicans to send illegal immigrants next?" The multiple-choice answers include "Barack Obama's House," "The White House," and "San Francisco."

Sen. Scott is the embattled head of the National Republican Senatorial Committee (NRSC), the official fundraising arm of the Senate GOP caucus. Recently he has been highly criticized by Republicans wondering why the NRSC's funding of critical Republican senate campaigns has been so poor. Earlier this month a New York Times headline read: "How a Record Cash Haul Vanished for Senate Republicans."