WATCH: Trump adviser Kudlow snaps at CNN's Tapper after being confronted with his rosy COVID-19 predictions 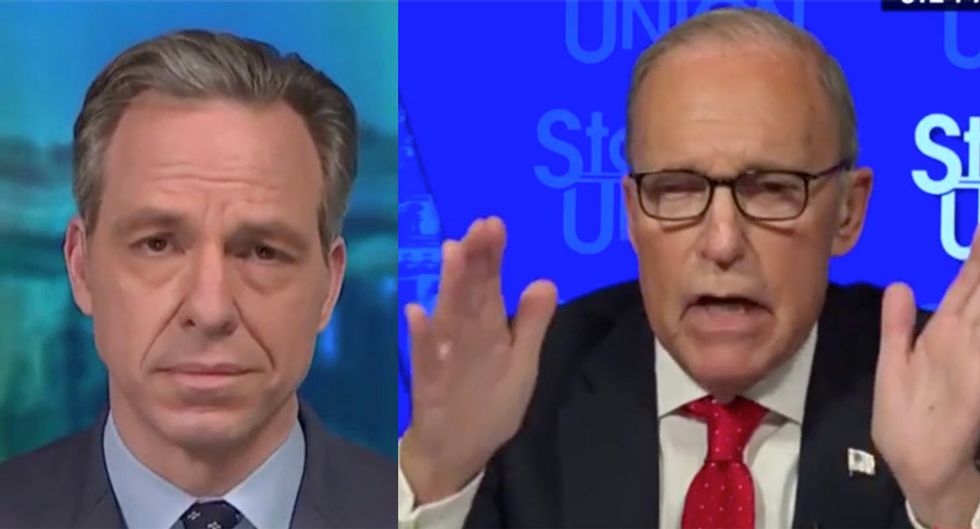 A long CNN interview conducted by "State of the Union" host Jake Tapper with White House economic advisor Larry Kudlow ended with Donald Trump's appointee lashing back at the host for running a clip of comments he made about the coronavirus pandemic that proved to not only be untrue but also contradicted health experts in the administration.

"The reason for the disconnect is that sometimes the people who understandably want to get the economy up and running have been saying things that contradict what some of the people who are health experts in the administration are saying," Tapper began. "For instance, at the end of February, Dr. Nancy Messonnier, who apparently got in the doghouse with President Trump for saying in a conference call that it was not a matter of if but when there would be a severe disruption to the American people and our way to live life."

"That's the same day, as you know, that you said this," Tapper continued before rolling tape of Kudlow claiming, "We have contained this. I won't say airtight, but pretty close to airtight. We have done a good job in the United States."

'I guess the question is: is there a disconnect between what people such as you who want things to be better than they are so as to help the economy are saying and what people in the health field are saying?" the CNN host asked.

"Well, look, Jake," Kudlow shot back. "For the umpteenth time I will say, my quote then was based on the actual facts which at the time there were only 40 or 50 cases and it was contained, particularly after President Trump boldly put up travel restrictions with China. I didn't make the forecast, and that was just -- there was hardly any cases, okay? Now, yes, some doctors were more fearful. Other doctors had many different things to say. I don't want to get in and play this game, who said what and when. Political leaders, one well-known political leader in the House went to Chinatown in San Francisco and said everything is okay, okay?"

Continuing his tirade, Kulow added, "You know, this sort of ankle-biting that's going on in Washington is just incorrect. You have to deal with the information at hand. When the information changes, you change. We changed our strategy. so did everybody else around the world change their strategy. So I'm just not going to -- I'm not going to accept that, Jake, I'm sorry to push back. You and I have known each other awhile, but that is the fact. We did what we had to do, as soon as the situation became much clearer."

The smiling CNN host concluded the interview by observing, "So I could respond with 15 minutes' worth of stuff right there, but unfortunately I don't have the time. We have three other interviews to get to. No, it's fine, you obviously felt passionate about that, I mean, there are certainly issues people could raise but I'm not going to bring them up right now because I don't have time to let you respond which would be the fair thing to do."