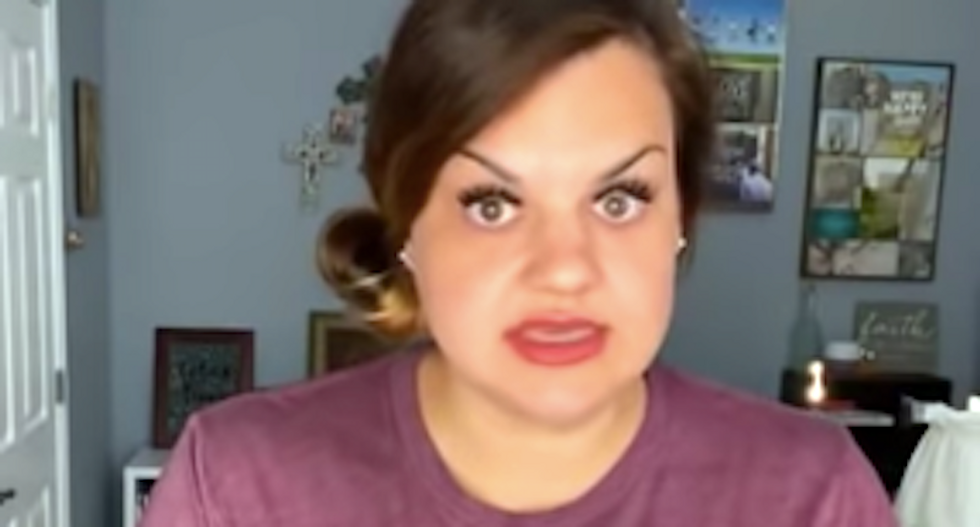 An anti-abortion activist suggested Black men -- like her adopted son will grow up to be -- deserve to be racially profiled because they're more likely to be violent criminals.

Abby Johnson, a former Planned Parenthood clinic director who now campaigns against legal abortion, posted the video July 25 claiming that police would be right to racially profile her adopted Black son, but not her four white sons, when they grew up, according to blogger Simcha Fisher.

“[My 5-year-old son is an] adorable, perpetually tan-looking little brown boy [but] one day he’s going to grow up and he’s going to be a tall, probably sort of large, intimidating-looking, maybe, brown man,” Johnson says in the video.

Her four white sons, on the other hand, "are probably going to look like nerdy white guys" when they are adults, she added, so it makes sense to her that they'd be treated differently from her biracial son.

“That doesn’t make me angry,” says Johnson, whose T-shirt displays a Vanilla Ice lyric. “I realized I’m going to have to have a different conversation with [my son] than I do with my nerdy white kids."

She justified this racist double standard by citing statistics showing Black men are more likely to be incarcerated than white men -- and therefore, she claimed, more prone to criminal behavior.

“I look at our prison population and I see that there is a disproportionately high number of African-American males in our prison population for crimes, particularly for violent crimes," Johnson says. "So statistically, when a police officer sees a brown man like my [child’s name] walking down the road, as opposed to my white nerdy kids.

"These police officers know in their head," she continued, "that statistically my brown son is more likely to commit a violent offense over my white sons. Okay, so the fact that, in his head, he would be more careful around my brown son than my white son, that doesn’t actually make me angry. That makes that police officer smart, because of statistics."

Black and white men use drugs at about the same rate, Fisher pointed out in her blog post, but Black men are six times more likely to be imprisoned on drug charges and more likely to receive a longer sentence than a white man for the same crime.

The majority of Black fathers do live with their children, according to the Centers for Disease Control, and are the most involved with their children of all racial and ethnic groups -- but Johnson blames absent fathers for police brutality against Black men.