Arizona's Martha McSally wants to pay you $4,000 to take a coronavirus vacation — sort of 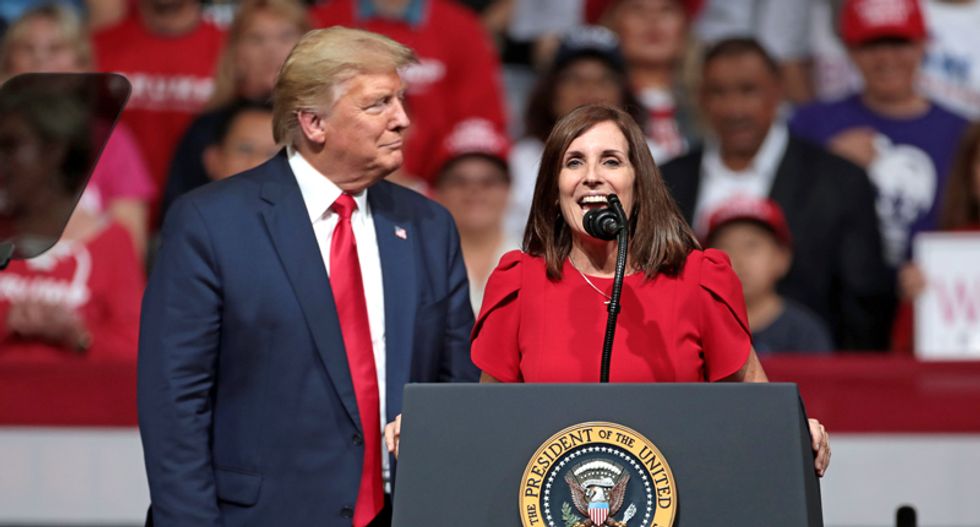 President Donald Trump and Sen. Martha McSally (R-AZ) at a campaign rally in Phoenix, photo by Gage Skidmore.
Sen. Martha McSally, R-Ariz., has proposed a bill that would give Americans $4,000 to go on vacation during the coronavirus pandemic.

The American Tax Rebate and Incentive Program Act (TRIP Act) — designed to "boost domestic travel" in her home state as a country rattled by the spread of COVID-19 enters its first summer vacation months — proposes a $4,000 tax credit for individuals and $8,000 credit for joint filers (and $500 for dependent children) they can put towards U.S. vacations until the end of 2022.

The credits would offset expenses such as accommodations and entertainment for trips further than 50 miles from a primary residence. The credit covers travel to vacation homes, as well as "expenses related to attending a conference or business meeting."

McSally faces an increasingly tough fall campaign against Democrat Mark Kelly (a former astronaut and the husband of former Democratic Rep. Gabby Giffords), whom McSally now trails by 13 points in the polls. She's entirely clear about the bill's target audience, saying in a statement she hopes to "jumpstart the comeback" of the tourism industry in the Grand Canyon State, a sector that normally pulls in $3 billion annually.

"Arizona has lost billions in revenue this year alone due to the pandemic," the statement said. "My legislation will help boost domestic travel and jumpstart the comeback of our hotels, entertainment sectors, local tourism agencies, and the thousands of businesses that make Arizona one of the best places in the world to visit. It will also encourage Americans to safely get out of their homes and discover or rediscover Arizona along with the rest of the amazing destinations our country has to offer after a difficult several months stuck inside."

McSally's proposal does not appear to include any mechanism to pay for it. As Bloomberg reporter Steve Dennis pointed out, this means that if 100 million Americans took up the offer, the government would eat $400 billion.

Unlike most tax credits, the bill also does not have a maximum income cap. But it does have a built-in minimum: Americans who don't earn enough money to pay income taxes cannot enjoy the vacation benefit. Because it is a tax credit, not a stimulus, any income tax due must be paid first.

Former Democratic presidential candidate Andrew Yang, a fan of universal basic income proposals, tweeted archly, "I like it if it's a staycation. Or visiting family in the next state over. Money in people's hands is a good thing."

The hospitality and tourism industry across the country has indeed been ravaged by the economic fallout from the coronavirus pandemic, which included lockdowns in 43 of the 50 states. Tourism accounted for nearly 40% of all U.S. job losses through April.

The $4,000 credit is not McSally's idea — the travel industry lobby has kicked around the proposal, including recently. Last month President Donald Trump mentioned it during a White House roundtable with leaders from the hospitality industry.

"Grant restaurants more flexibility under the PPP," the president continued, inaccurately. "That's what we're talking about — right?" (That is not what anyone was talking about.)

McSally, who is now even seeing Republican voters defect from her support base, is joining Trump on Tuesday at a student rally in Arizona. It will be Trump's second campaign event after a three-month hiatus due to the pandemic, and the first since his "Great American Comeback Celebration" in Tulsa landed with a thud.

McSally's proposal comes as a surge in COVID-19 figures sparks fears of a second wave of infections and concomitant economic restrictions. More than 2.3 million Americans have been infected, and at least 121,000 have died of the virus, according to the most recent data from Johns Hopkins University.

McSally's campaign and Senate office did not reply to Salon's request for comment.