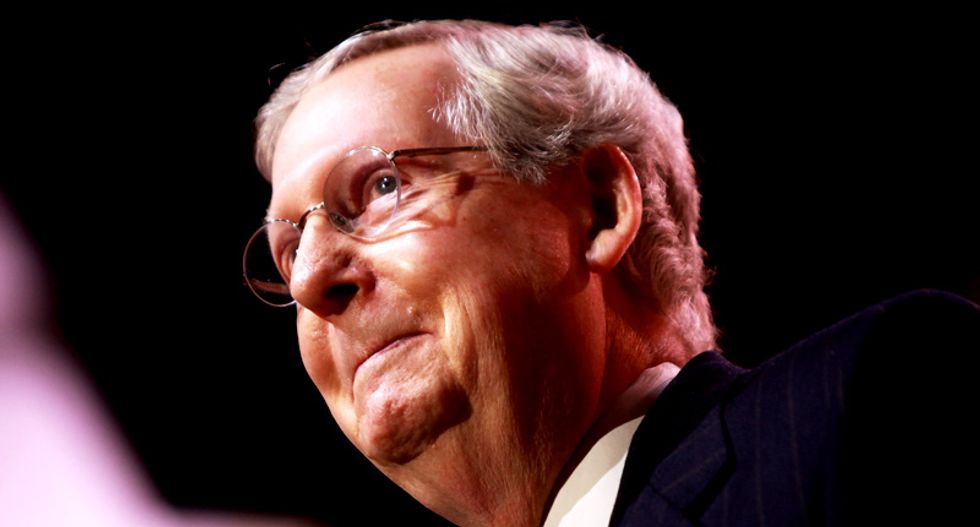 "Wilson's record against civil rights and healthcare, and his lack of judicial temperament and experience, should have disqualified him."

"While the people demand policing reform and relief from the Covid-19 pandemic, McConnell is doubling down on stacking our courts."

Lena Zwarensteyn, Fair Courts Campaign director at the Leadership Conference on Civil and Human Rights, ripped Senate Majority Leader Mitch McConnell (R-Ky.) for ramming through a judge with a "record antithetical to 'equal justice under law.'"

"While the people demand policing reform and relief from the Covid-19 pandemic, McConnell is doubling down on stacking our courts," Zwarensteyn said in a statement. "These efforts to dismantle our civil and human rights will reverberate for generations to come. Wilson's record against civil rights and healthcare, and his lack of judicial temperament and experience, should have disqualified him."

Wilson's confirmation by a largely party-line vote—Sen. Susan Collins (R-Maine) joined every Democrat in voting no—means there is no longer a single U.S. Circuit Court vacancy for the first time in four decades. Progressives have warned that the president's disproportionately young judicial picks could have a decisive impact on the environment, labor law, civil rights, and other significant areas of U.S. society for decades to come.

Last November, McConnell bragged that he and Trump are "changing the federal courts forever."

HuffPost reporter Jennifer Bendery highlighted some of the reasons why civil rights groups were so alarmed by Wilson's appointment and lobbied hard against his confirmation:

He has described the Affordable Care Act as "illegitimate," "perverse," and "liberal-utopia-dictated healthcare." He supports "the complete and immediate reversal" of Roe v. Wade. He called same-sex marriage "a pander to liberal interest groups" and "an attempt to cast Republicans as intolerant, uncaring and even bigoted."

In a 2011 op-ed, Wilson dismissed the NAACP's concerns about a proposed Mississippi voter ID law as "poppycock." He ripped the Justice Department in 2013 for sending election observers to the state, which has a long history of voter suppression and intimidation, and instead suggested federal officials go after incredibly rare cases of "voter fraud."

Erinn Martin, policy counsel at the Lawyers' Committee for Civil Rights Under Law, said in a statement that Wilson's confirmation "threatens the welfare of Black and Brown communities in the Deep South," over which the Fifth Circuit presides.

"The confirmation of Mr. Wilson, a vociferous opponent of voting rights and access to healthcare, is an affront to many of the low-income Black and Brown communities who comprise the majority of the region the Fifth Circuit hears cases from," said Martin. "President Trump could not have found a more biased, unqualified, and anti-civil rights nominee."