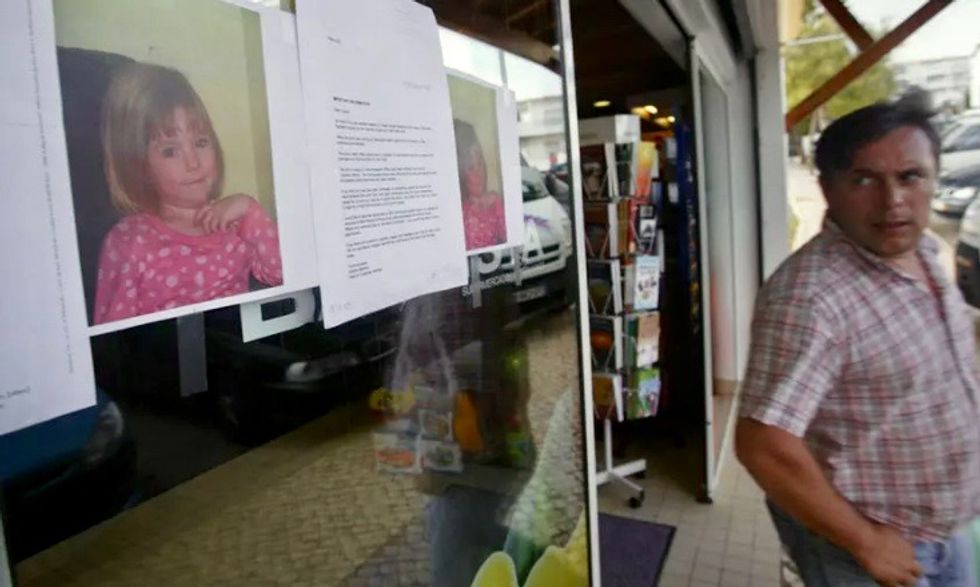 Police revealed Wednesday they have identified a new suspect in the disappearance of British girl Madeleine McCann in 2007, saying the 43-year-old German man with a history of child sex abuse may have killed her.

The suspect, who was not named, is serving a "long prison sentence" for an unrelated matter, said Germany's federal criminal agency.

He has previous convictions over child sexual abuse, the agency added.

"In connection with the disappearance of the then three-year-old British girl Madeleine Beth McCann... the Braunschweig public prosecutor's office is investigating a 43-year-old German citizen on suspicion of murder," said federal police in a statement.

On May 3, 2007, a few days before her fourth birthday, "Maddie" disappeared from her family's holiday apartment in the Algarve village in Portugal as her parents dined with friends at a nearby restaurant, sparking one of the biggest searches of its kind in recent years.

Despite a wide range of suspects and theories about what happened, no one has ever been convicted over her disappearance.

Lead investigator Christian Hoppe told ZDF television that the inquiry had led police to suspect that the man had killed Madeleine.

Described as white with short blond hair in 2007, the man was about six feet tall, with a slim build.

He regularly lived between 1995 and 2007 in the Algarve, and did occasional jobs in the area, including in the gastronomy sector, police said.

"There is information suggesting that he also earned his living by committing criminal offenses, such as burglaries of hotel complexes and holiday flats as well as trafficking in narcotic drugs," added German police.

Launching an appeal for information, police cited in particular two vehicles the suspect was known to have used as well as two phone numbers.

The first is a dark colored Jaguar XJR 6 which bore a German plate from the city of Augsburg. The second vehicle is a Volkswagen T3 Westfalia with a Portuguese plate.

Of the phone numbers, one was known to have belonged to the suspect, while the other number belonged to someone who spoke with the man for 30 minutes, "just over an hour before Madeleine was last seen," said British police in a separate press briefing.

Welcoming the appeal launched in conjunction with British police, the girl's parents Kate and Gerry McCann said in a statement that: "All we have ever wanted is to find her, uncover the truth and bring those responsible to justice.

"We will never give up hope of finding Madeline alive. But whatever the outcome may be, we need to know as we need to find peace."

After a huge manhunt at the time, Portuguese police closed their investigation in 2008 after 14 months, which at one point implicated her parents in her abduction before their names were cleared.

British police opened their own inquiry in July 2013, but excavations in Praia da Luz yielded no evidence.

The lead investigator in Britain, Mark Cranwell, said police were given a tip-off after the ten-year anniversary of Madeleine's disappearance about a German man who was known around the Praia da Luz area in Portugal.

Joint investigations with Portuguese and German police have subsequently led to the suspect.

British police said however that they were still treating the case as a "missing person inquiry".

"I'm appealing to you directly: you may know, you may be aware, of some of the things that he has done," said Cranwell.

"More than 13 years have passed, and your loyalties may have changed. This individual is in prison and we are conscious some people may have been concerned about contacting police in the past. Now is the time to come forward.

"Somebody out there knows a lot more than they're letting on. Somebody knows something," said Cranwell.