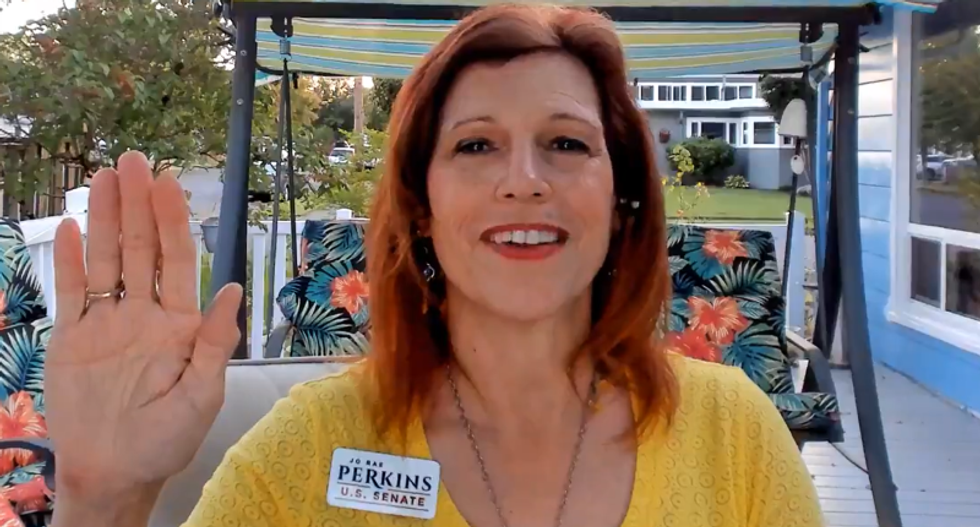 On Friday, Jo Rae Perkins, the Republican Senate nominee in Oregon, filmed herself taking what sounded like the standard American constitutional oath of office, with her right hand raised, as if practicing for being sworn into office.

However, there is a darker meaning behind Perkins' display. She was in fact taking the "digital soldier oath," a pledge that is making the rounds among supporters of the QAnon conspiracy theory to signify their loyalty to the cause. Twitter is full of videos of QAnon believers taking the same oath.

Perkins, who currently works as an insurance agent, has openly signaled her support for the movement. Her campaign previously tried to deny the connection, saying she "would never describe herself as a follower," but Perkins threw her communications team under the bus, saying she was "physically in tears" over the denial and is in fact a believer.

QAnon is an elaborate conspiracy theory that posits President Donald Trump is secretly trying to take down a world-spanning sex trafficking operation run by prominent Democrats and celebrities, and that any day now the president will declare martial law and order mass arrests of the enemies of America. The FBI has named QAnon as a domestic terror threat, and some of its followers have engaged in violent acts including the assassination of a Gambino crime boss in Staten Island.