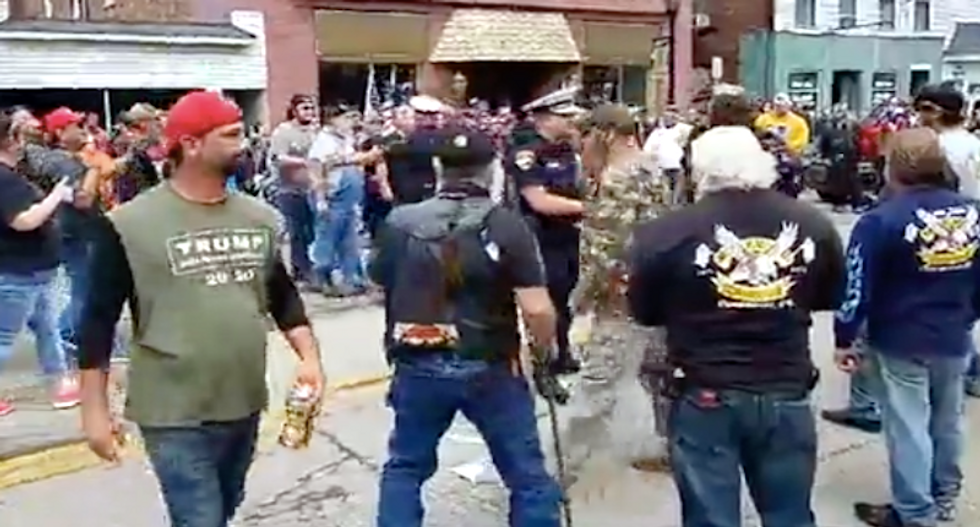 A small-town solidarity rally with Black Lives Matter ended in chaos after some of President Donald Trump's supporters showed up with guns to berate demonstrators.

Alicia Gee, a 36-year-old substitute teacher, was inspired by demonstrations in Hazard, Kentucky, to hold a protest in her hometown of Bethel, Ohio, to show support for equal rights, reported the Cincinnati Enquirer.

"I guess in my mind, we only think about protests happening in the city," Gee told the newspaper. "I've always gone to cities to protest, and then to see that something was happening in Hazard — I was like, if Hazard, Kentucky, can have a protest, Bethel can have something."

Gee, a former children's minister and a member of the village's arts collective, set up a Facebook page for the event Tuesday, hoping to draw about 50 supporters, and she drew chalk marks on the sidewalk Saturday night to allow demonstrators to remain socially distant from one another.

But her plans were upended when a group of armed motorcyclists and others showed up wearing Confederate flag, Punisher and Trump-themed hats and clothing, some of them apparently drawn by online warnings that the demonstration was organized by Antifa activists.

"Around 3:30, the... counterprotesters?, started walking down on the other side of the street from up town, yelling obscenities and threatening us," wrote demonstrator Abbi Remers, whose brother was punched and knocked to the ground."A few started coming over and ripping signs out of our hands, ripping the hats and masks off of our faces, ripping things out of our pockets. Then they started surrounding us."

The counter protesters assaulted some of the demonstrators and screamed at the group to go back to Cincinnati, which is about 30 miles west of the rural Clermont County village.

"Traitors, take your ass back to the parking lot!" one man screams at a protester who had been violently attacked in the street and sent away by police. "A bunch of f*cking traitors."

"You're in the wrong town," said one man carrying an American flag. "Get this on your phone -- this ain't Seattle. You're not in a Democratic state here. We don't put up with that sh*t. All lives matter."

"This is a f*cking Republican state, b*tch," shouts an even louder man. "We don't play here."

Police stood by as the protesters interfered with the demonstration, which ended up drawing up to 800 people, and demonstrators felt threatened by the armed group.

“I knew there were counter-protests but I never dreamed that grown men would grab our signs and our person. It felt like we were walking a gauntlet,” said 63-year-old Lois Dennis. “I saw a side of America that shamed me.”

Officials reported about 10 "minor scuffles" during the clash, but some social media users posted photos of injuries consistent with physical assaults.

"I was really scared because they were carrying guns and they were so aggressive," said 36-year-old Andrea Dennis. "They were grabbing me and grabbing my mom and they just seemed to have no respect for the law."

Gee said the counter-protesters didn't understand their own community's history.

"Bethel was founded with abolitionist groups," Gee told the Enquirer. "We were a stop on the Underground Railroad. Our first mayor was Ulysses S. Grant's father, and clearly we have moved away from those groups. I just felt like it was time that we get back to them and demonstrate that we aren't filled with white supremacy and hate."