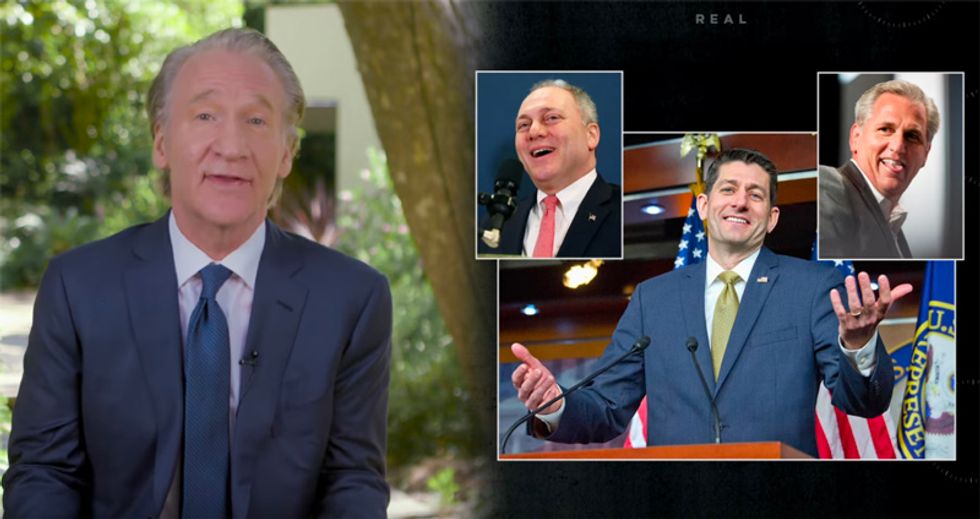 As part of his "New Rules" segment on HBO's Real Time, host N Bill Maher slammed Republican lawmakers who have done nothing to rein in Donald Trump for over three years as he has run roughshod over national policies, political norms and common decency.

Equating the president to someone who doles out rough sex, Maher said the GOP has needed to use their "safe word" to get him to stop since the moment he began running for office and called Mexicans "rapists."

"It was soon evident that no line was going to be drawn in matters of behavior," the HBO host explained. "Mocking the handicapped, bragging about your dick at the debates, grabbing p*ssies -- all good."

"Then, once in office, it became apparent the line would also not be drawn at what we call norms, you know, practices universally agreed upon to be the right thing to do that we never thought we needed to codify into law. Releasing your taxes, not putting family members in your cabinet, having press briefings, siding with Americans instead of Russians -- and then we moved on to breaking actual laws."

As Mahrer noted at the conclusion of his diatribe, "Is that stuff that will Republicans say, I'll do anything for love, but I won't do that. If you've got a safe word, Republicans, you better use it soon. Because Democracy is about to stop breathing."