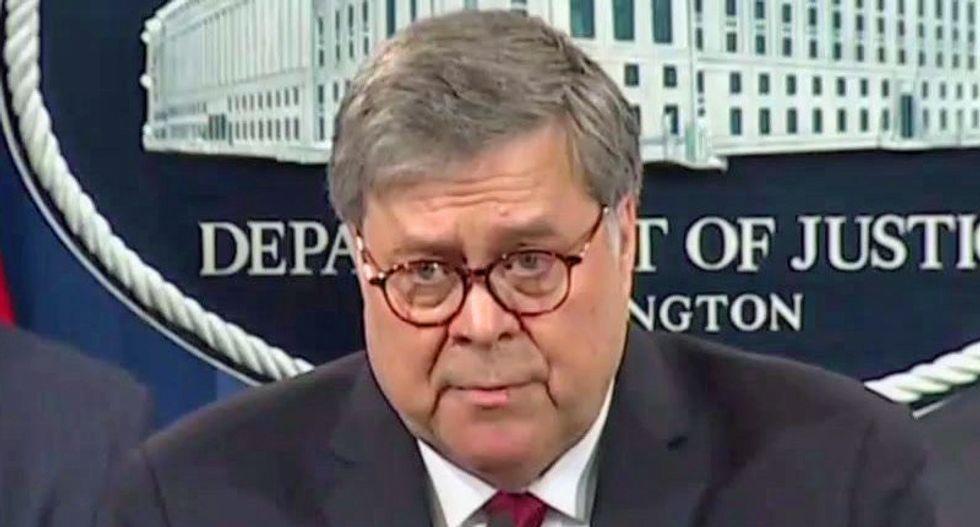 Attorney General Bill Barr is still trying to desperately clean up the public relations mess created when federal law enforcement violently cleared the area in front of the White House last week prior to President Donald Trump’s trip across the street. But in trying to tamp down the blowback these acts sparked, Barr — apparently inadvertently — undermined Trump’s transparently silly excuse for his recent trip to the White House bunker.

Critics have slammed the administration, and Trump and Barr in particular, for the plan that included officials assaulting, teargassing, and otherwise accosting the protesters who were participating in First Amendment freedoms in Lafayette Square. Journalists on the scene also came under that assault and reported that it came without warning or provocation.

The administration has tried to push back on this narrative, claiming the protesters were warned, that at least some were throwing objects at police, and that “tear gas” wasn’t used (even though pepper bombs — which release an irritating and tear-inducing gaseous compound — were indisputably used, and evidence indicates other forms of tear gas were employed.) But no compelling evidence supports these accounts, and the reporters who were there tell a different story.

Speaking with Fox News on Monday, Barr tried to paint the protesters as unruly and potentially dangerous, saying that the “perimeter” around the White House needed to be expanded. He claimed that the protesters would have been forcefully moved even if the president hadn’t been planning to walk across the area just minutes later, a claim many critics have found hard to believe. In justifying this aggressive action, though, Barr appealed to a story the president has tried to refute.

“Things were so bad that the Secret Service recommended the president go down to the bunker,” Barr said. “We can’t have that.”

Trump confirmed in an interview with Fox News’ Brian Kilmeade last week that he went to the bunker — on the previous Friday, not the following Monday when the now-infamous June 1 photo-op took place — but he disputed reports it was for his safety.

“Well, it was a false report. I wasn’t down. I went down during the day, and I was there for a tiny little short period of time, and it was much more for an inspection. There was no problem during the day,” Trump said. “Someday you may need it, but you go there, and I went down, I looked at it, it was during the day. It was not a problem. I read about it like a big thing. There was never a problem. We never had a problem. Nobody ever came close to giving us a problem. The Secret Service does an unbelievable job of maintaining control in the White House, and beyond the Secret Service, we have a lot of other great people out there, including the D.C. Police.”

This implausible explanation earned much mockery when it was given, as it seemed clear that Trump lying because he’s afraid of seeming weak. Of course, there’s nothing in principle wrong with a president using the safety protocols of the White House if it’s determined there’s a serious risk.

But now Barr has completely undermined Trump’s excuse, saying the president visited the bunker because the situation was “bad” — not for an “inspection.” It remains to be seen if Trump will feel the need to contradict the attorney general, or if he can just let the matter slide.