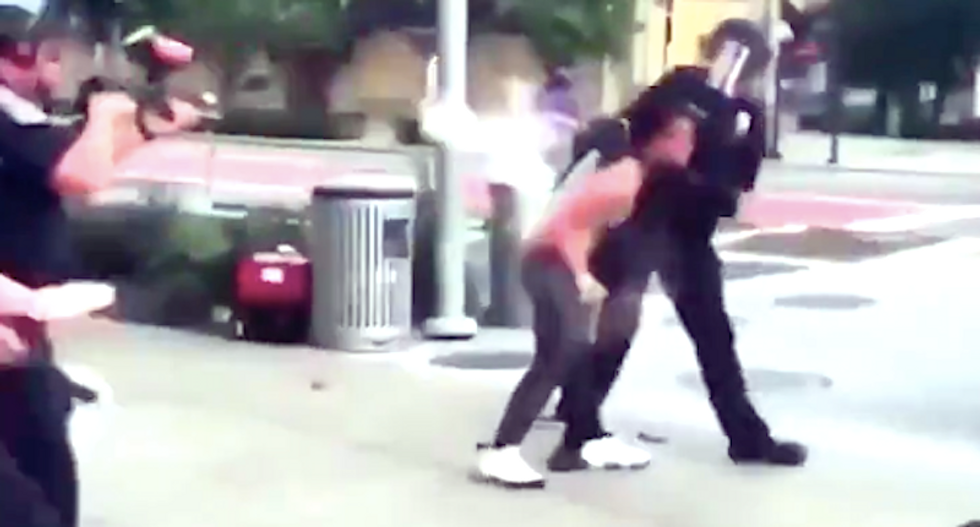 Indianapolis police officers are under investigation for beating a black woman with batons and shooting her at close range with pepper balls during protests against police brutality.

In a widely circulated video clip, officers can be seen repeatedly battering the woman with batons and firing less-lethal weapons as she stands still Sunday afternoon at the corner of North Pennsylvania and East Washington streets, reported the Indianapolis Star.

One officer can be seen standing behind the woman with his arms pinning her shoulders back, and he appears to grope her right breast, causing her to break away from his grip.

"Hit her! Hit her!" an officer shouts.

One officer instantly opens fire from a few feet away with a pepper ball gun, and two others set upon her with batons, whacking away at her belly and the backs of her legs as she stands still.

A white woman approaches, pleading with officers to explain why they were beating the black woman.

An officer then shoves the white woman to the ground, and police kneel on both women's backs and take them into custody.

It's not clear what happened just before the 28-second clip begins.

The police department has opened an internal investigation of the arrests, and declined to offer additional information.

The newspaper was unable to confirm the identities of either woman in the video or the individual who recorded the video.