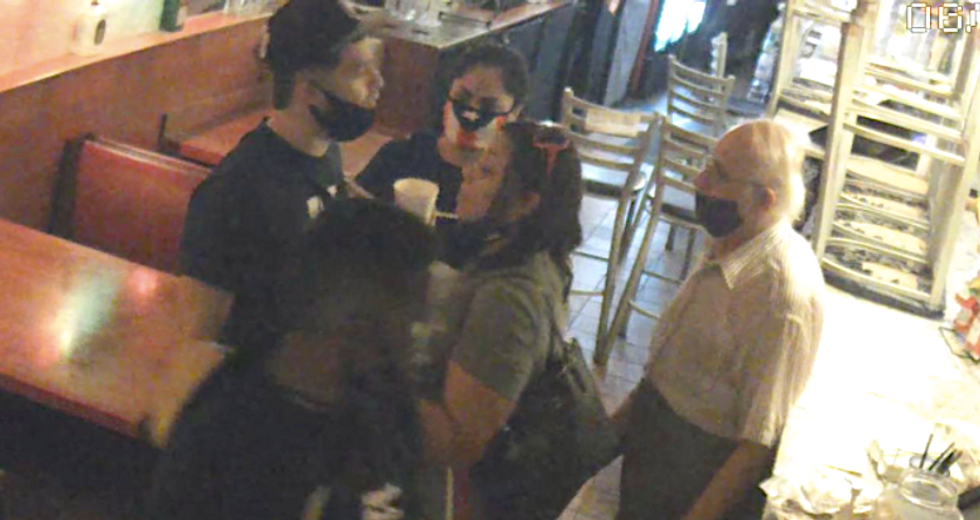 A Massachusetts man was charged with assault after punching an elderly restaurant owner in a dispute over face masks.

Angel Gomez got into an argument with employees at George’s Pizza in Provincetown while out with family members Saturday night, and 81-year-old owner George Kraniotakis came from behind the counter and got in the younger man's face, reported the Cape Cod Times.

“They weren’t wearing their masks when we asked them to,” said Francine Kraniotakis, the owner's daughter. “My dad comes around and asks them to sit down and put on their masks. The guy said something like, ‘We don’t want to.’”

She said her father told the 27-year-old Gomez to pull up his mask from below his chin or leave, and the younger man struck him.

An attorney for Gomez said the restaurant owner -- who does not speak fluent English himself, according to his daughter -- told him to speak English and not Spanish.

The elderly man was dazed and confused by the blow but refused medical treatment, and an employee followed Gomez and his group to McMillan Pier -- where the employee allegedly attacked him.

Andrew Chartier, a cook and bartender at the pizzeria, confirmed that he and another bartender followed and confronted the group, and he said Gomez bit his arm during an ensuing altercation.

Police arrived 10 to 15 minutes later, and they took Gomez into custody but let the others go, and Chartier said they waited for him in a nearby parking lot and jumped him.

Gomez, who was already on probation for possession of a firearm without a permit and distribution of a class B drug, remains held on $2,500 bond, and police said he initially gave them a false name.

The FBI and law enforcement community has been warning of an increase in domestic terrorism for several years. During former President Donald Trump's administration, funding in dealing with it has remained unmatched to international terrorism.

"We elevated to the top-level priority racially motivated violent extremism so it's on the same footing in terms of our national threat banding as ISIS and homegrown violent extremism," said FBI Director Christopher Wray, speaking to Capitol Hill Feb. 2020.