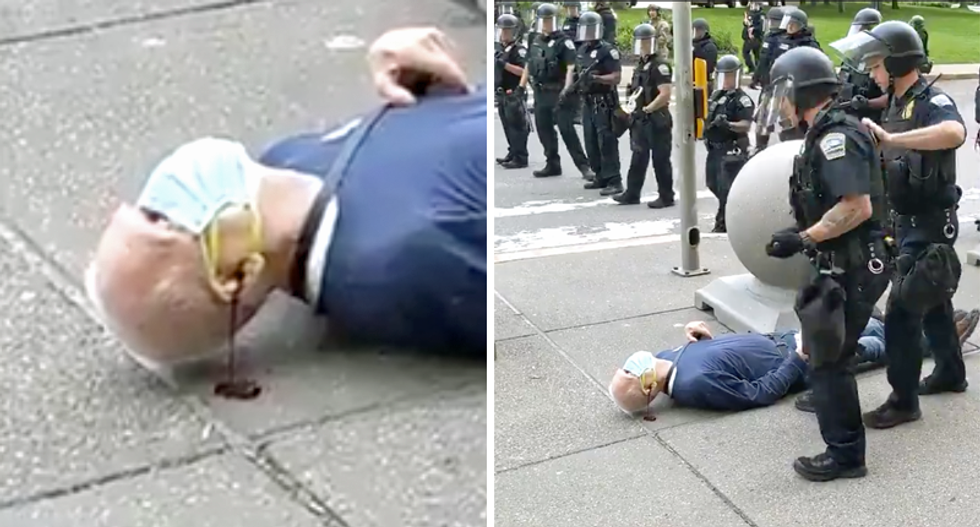 Man bleeding from the ear (screengrabs)

The Buffalo Police Department Emergency Response Team was harshly criticized online after all 57 officers resigned from the team in solidarity with officers who were suspended for shoving an elderly man during protests against police violence.

Video went viral on Thursday that showed police shoving 75-year-old Martin Gugino, who bled from the ear after his head hit the concrete with a thud.

“Fifty-seven resigned in disgust because of the treatment of two of their members, who were simply executing orders,” Buffalo Police Benevolent Association president John Evans said in a statement.

The "superior orders" defense is also known as the Nuremberg defense, which was used by Nazis tried for war crimes.

“The fact that a person acted pursuant to order of his Government or of a superior does not relieve him from respon… https://t.co/5YPyqMLXKd
— heathen king (@heathen king)1591386120.0

Does anyone have a time machine? I think we need to go back and redo the Nuremberg trials. Apparently "just followi… https://t.co/TYckIReO5e
— beeeeennnn 벤 (@beeeeennnn 벤)1591386261.0