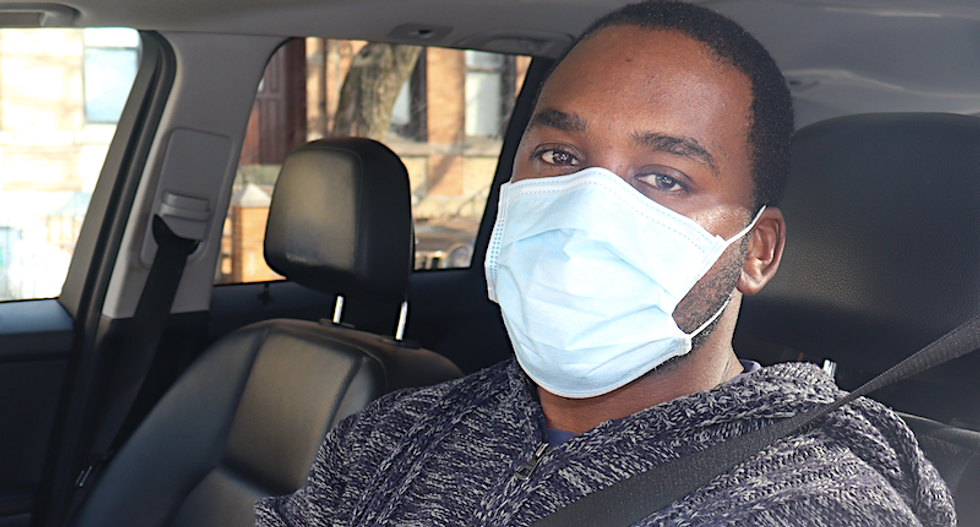 A new study found Black people are perceived as more threatening if they wear an improvised mask than a surgical mask.

“There’s a lot of prejudice and discrimination out there, and African Americans are more likely, it seems, to face that when wearing a bandana or a cloth mask face covering," said Steve Greene, a political science professor at North Carolina State University.

Greene and researchers at the University of North Carolina surveyed 2,400 non-Black people nationwide and found that a Black model and white model were viewed as 5 percent more untrusthworthy and more threatening while wearing a bandana, as opposed to when wearing a surgical mask.

Researchers then focused on respondents who admitted to holding negative racial views, and they found the white model stayed at 5 percent while the Black model shot to 9 percent more untrusworthy and 12 percent more threatening while wearing a bandana mask.

The Black model was viewed essentially the same while wearing a surgical mask as when he wore no mask at all.

"Something like a bandana [suggests] bank robbers, criminals – a threat," Greene said. "Something like a surgical mask brings an entirely different set of stereotypes. Honestly, you are thinking about doctors and nurses."

Greene said his team hopes to have their study peer reviewed and then published, but they have already sent their findings to state health officials to recommend distribution of surgical masks in Black communities.

“We would argue that, with the governments making policies saying everybody needs to wear a mask, that to some degree, it is incumbent upon the government – the government's responsibility – to help ensure that everybody, especially the African Americans in our area, can get those surgical masks," Greene said.

Black communities have been hit hard by the pandemic -- nearly one third of Black Americans know someone who died from COVID-19 -- but many Black men feel that wearing a mask is more of a threat than the coronavirus.

“Which death do they choose? Covid-19 or police shooting?” said Vickie Mays, professor of health policy and management at UCLA’s Fielding School of Public Health. “We have African Americans who have been dragged out of stores, who have been ordered by police and store guards to pull their masks down or take their masks off.”

Lincoln County, Oregon, had initially excluded Black people from mandatory mask orders for that reason, but were forced to reverse the decision after a torrent of "horrifically racist commentary" after news reports about their order went viral.

“We passed this last week and didn't hear much, and then all of a sudden, our call center blows up with people just yelling at whoever answers the phone," said Casey Miller, spokesman for the county commission. "We got so many angry emails and calls we’ve been totally overwhelmed. It’s been hard to do day-to-day work, like getting information to people worried about health, or getting a test, or getting a meal while they’re in quarantine.”

The county's Black residents asked them to reverse the exclusion because it ended up making them feel even less safe.

"The county received several calls from leadership from our communities of color asking us to revise the policy — it was not providing them protection, but instead making them possible targets for more hate," the board of commissioners wrote. "We will not continue a directive and policies that were intended to assist but instead are a potential source of harm."