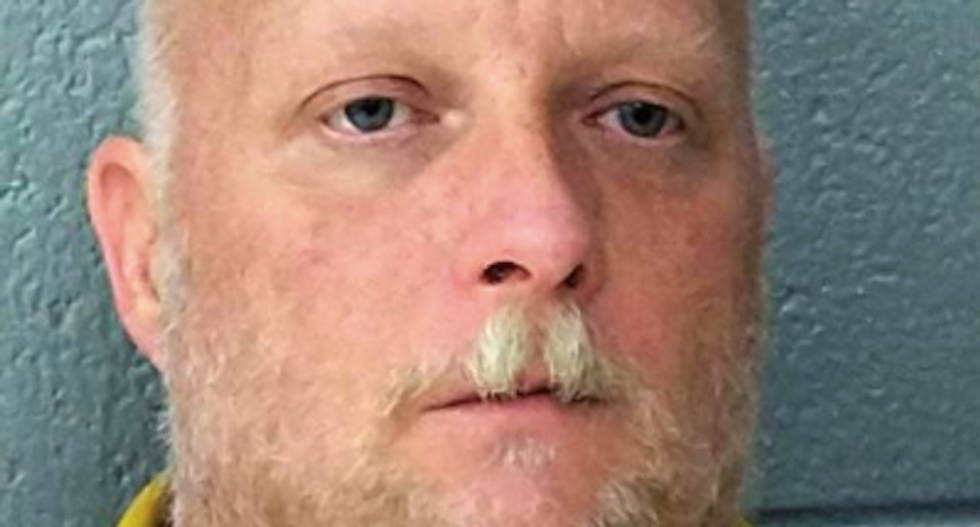 An Oklahoma Nazi sympathizer is accused of shooting a partygoer who was dared to snatch one of his swastika flags.

The victim had been at a party across the street from Alexander John Feaster's home in Garfield County, where he displayed a Nazi flag that had been stolen in the past, reported KFOR-TV.

“It’s never really been a problem, his flags got stolen a couple times when he first put them out but nothing ever came of it," a neighbor said. "This is the first time it’s ever come to violence. He’s been out mowing neighbors' yards and just smiling and waving at everyone.”

But the neighbor said the 44-year-old Feaster, who sported a toothbrush mustache like Adolf Hitler, sometimes wore a full black uniform in public with a red swastika armband, in addition to flying multiple Nazi flags.

The 26-year-old woman had been partying at a neighbor's house early Sunday morning when someone dared her to steal Feaster's flag, and he allegedly opened fire as she fled.

“On the way back someone hollered gun,” said Sheriff Jody Helm. “She dropped the flag at the end of the driveway and shots were fired.”

Deputies found the woman lying in a ditch with multiple gunshot wounds, and Feaster was arrested at the scene without incident.

“We recovered the suspect's rifle, and we got about 14 guns out of there and some ammunition,” Helm said after deputies executed a search warrant.

A neighbor said Feaster had been flying Nazi flags for about a year.

“Nobody really knows him,” the neighbor said. “He keeps to himself.”

Feaster remains jailed on a charge of shooting with the intent to kill and assault and battery with a deadly weapon.

The district attorney will decide whether to charge the woman in the theft of Feaster's flag.

The woman underwent surgery for her wounds but is expected to recover.