Peter Navarro explodes with bigotry on CNN: 'That virus was a product of the Chinese Communist Party' 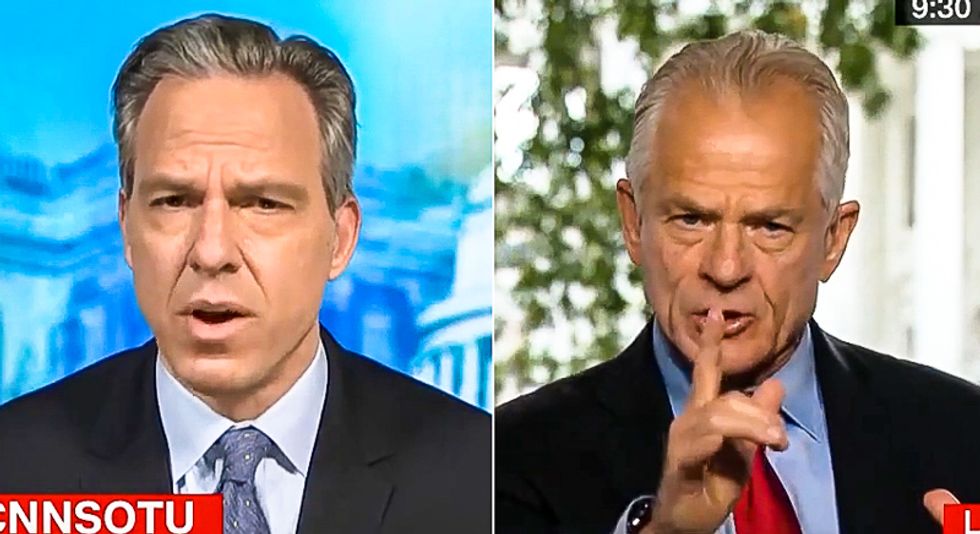 White House trade adviser Peter Navarro claimed on Sunday that the novel coronavirus pandemic is "a product of the Chinese Communist Party."

During an interview on CNN's State of the Union program, host Jake Tapper asked Navarro about President Donald Trump's call to reduce COVID-19 testing in the United States.

"That was tongue-in-cheek," Navarro insisted. "Come on now."

"I don't know that it was tongue-in-cheek," Japper said. "He has said similar things for months."

"We've seen over 100,000 people die because of the China Wuhan virus," Navarro countered. "Let's talk about some serious issues. I don't want to go there."

"I think testing is a very serious issue," Tapper insisted. "I'm not the one making jokes about it."

"It was a light moment," Navarro shrugged. "We're 60 seconds into a tongue-and-cheek thing. Asked and answered."

"China created this pandemic," Navarro ranted. "They hid the virus, they created that virus and they sent over hundreds of thousands of Chinese citizens here to spread that around and around the world. Whether they did that on purpose, that's an open question. But that's a fact."

"The Chinese Communist Party did tremendous damage to this society and this economy," he continued.

"Did you say China created this virus?" Tapper asked.

"Do you think it was purposefully created?" Tapper wondered.

"Do you have evidence of that?" Tapper pressed.

Navarro responded by saying that he had predicted that the "authoritarian structure" of China would lead to a pandemic.

"Roll the tape back," he added. "I said that virus came out of China. The Chinese Communist Party is responsible for it."

"You said they created it, right?" Tapper remarked.