Rachel Maddow: 'The federal government is just abandoning ship' on stopping the coronavirus 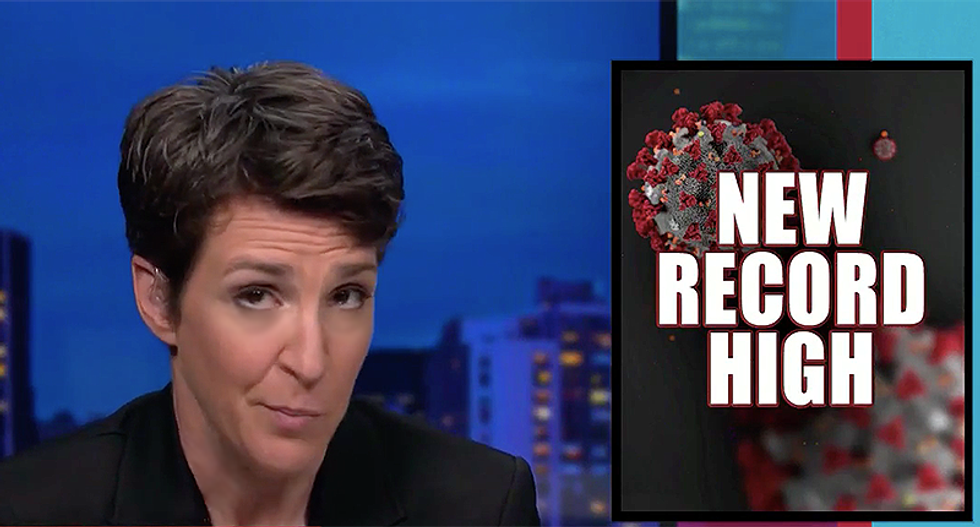 MSNBC's Rachel Maddow described the "dystopian" world that the United States has been thrust into as the federal government has decided they're done dealing with the problem.

The United States just had the worst day on record for coronavirus cases, but President Donald Trump hasn't met with the coronavirus task force in weeks. Meanwhile, Vice President Mike Pence told elected officials on Capitol Hill today that there were only a few counties in the country having spikes, which is false.

"So you have got the tri-state area that went through hell and high water and is coming out of it and has bent their curve all the way down," she continued. "You see those states now banding together and say well we are going to try to protect ourselves from the states where this thing is out of control. Today in Virginia, for example, it looks like that's going to be the first state in the country to issue their own statewide binding workplace safety rules for what companies have to do to keep workers safe from coronavirus in the workplace."

She noted that it's "weird" to see states trying to solve the crisis by themselves without the help of the U.S. government, which usually swoops in during national problems.

The failure of the federal government to address the coronavirus crisis will likely "start to pull the states apart from one another and to pit the states against each other in some ways," Maddow predicted. "And if we have good leadership in the states, we can all hope and pray that the states will try to work together cooperatively and collectively to advance their mutual interests."

See her opener below: