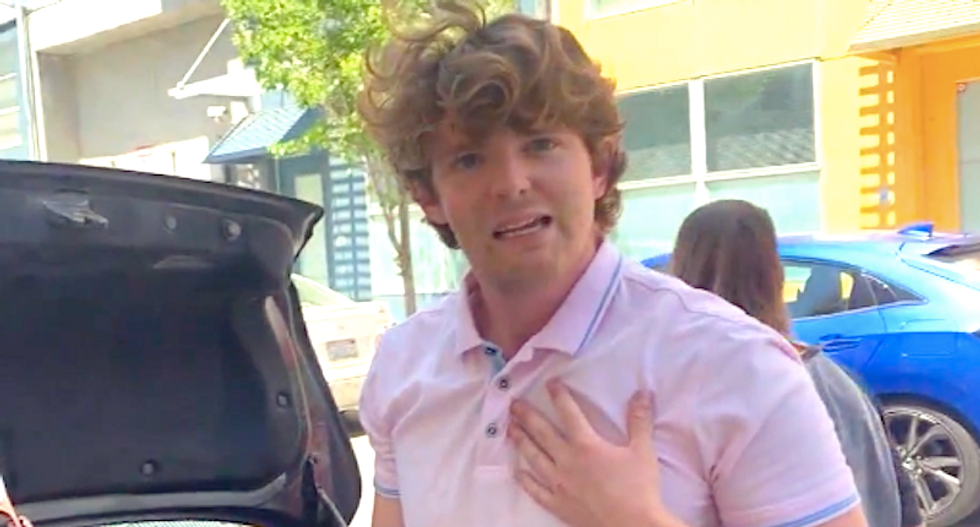 A San Francisco man was blocked from entering his own apartment building by a white couple who called him a "criminal."

Michael Barajas, a Berkeley graduate and community educator for a biopharmaceutical company, said he used his remote key fob to open the garage door to SOMA Residences after coming home Tuesday evening from buying fruit, but a white SUV pulling in ahead of him purposefully blocked the entrance to the garage, reported KGO-TV.

"His immediate reaction was, 'Hey, you f*cking criminal, you're not coming in here,'" Barajas said.

Barajas, who recorded the encounter, said he was wearing black and his tattoos were visible, and he thinks the other man, later identified as William Beasly, decided he posed a threat.

"You don't have a right to come in here!" Beasley says.

Beasley then asks Barajas to show his key fob, and their dispute escalates until bystanders jump in.

"Dude, pull into your space and go!" says one man.

Barajas said the dispute continued for about 20 minutes, and he said Beasley threatened to shoot him and the video shows Beasley shove one of the bystanders.

SOMA Residences told the TV station they're working to resolve the situation, and Beasley was fired from his tech job with APEX Systems.

One of the station's photographers encountered Beasley, who said the situation could have been avoided if Barajas used his key fob -- which Barajas said he did -- and he denied that his behavior in the video was motivated by racism.

"Completely not true, why are you attacking me?" Beasley told the photographer.