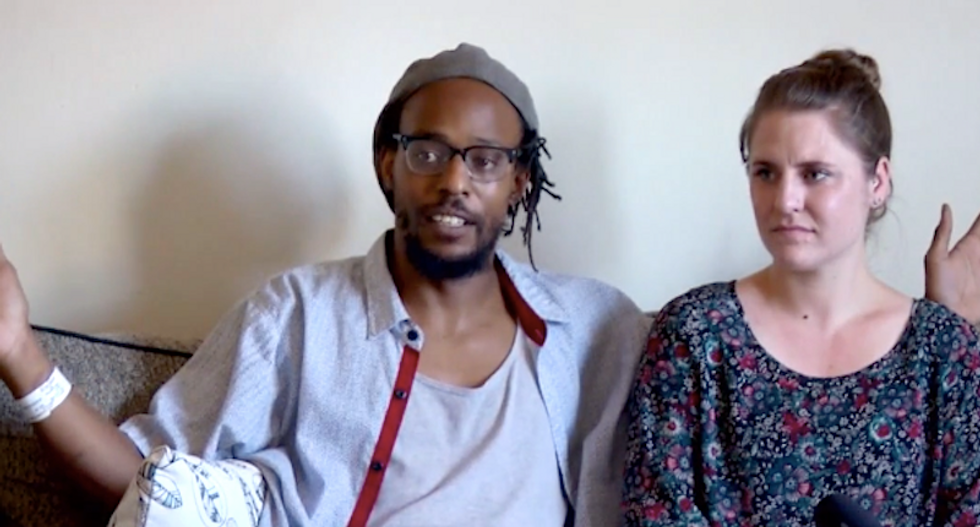 California police maimed one of their own trainers as he tried to intervene in an outbreak of violence during nationwide protests against police brutality.

Derrick Sanderlin has for years trained San Jose police recruits how to avoid implicit bias against racial minorities, but the 27-year-old was shot in the groin by a rubber bullet fired by one of the department's officers -- causing his testicle to rupture, reported KGO-TV.

“The doctor said there was a possibility I could be sterile due to the ruptured testicle,” Sanderlin said. “He said they saved everything, but won’t know for sure until we try to have kids. I was terrified out of my mind. Maybe a week before the protests, my wife and I were talking about how maybe in a year, we’ll have saved up enough to think about having kids.”

The 27-year-old Sanderlin, a community activist and head of the faith-based People Acting in Community Together, stopped a demonstrator May 29 from smashing the window of a car with his skateboard, allowing the driver to get away as protesters shut down Highway 101.

The driver had a "Blue Lives Matter" license plate frame, which he later admitted to displaying to get out of speeding tickets and not in support of police.

Sanderlin then headed over to City Hall, where he saw officers shooting rubber bullets at protesters -- and he again intervened.

"I really just couldn't watch it anymore," Sanderlin said, "and just kind of made like a parallel walkover, put my hands up, and just stood in the line of the fire and asked them to please not do this."

Video shows Sanderlin standing about 10 to 15 feet away from police with his hands raised, but officers shot him anyway with less-lethal bullets.

“I stepped into the line of fire, and a couple of cops said, ‘Move,’" Sanderlin recalled. "I said, with my hands up, ‘I can’t do that, please don’t do this.' Another cop came up behind them, pointed directly at me, and said, ‘Move.’”

“He fired off a rubber bullet, and I realized he wasn’t aiming for my chest," he added. "I was hit directly in the groin."

Sanderlin's attorney Sarah Marinho said her client had done nothing to warrant the use of force, and she believes the officer violated regulations against firing rubber bullets at a person's head or groin.

“He’s so close, it’s hard to believe they weren’t aiming for his groin,” Marinho said. “At no distance is it safe to aim for the groin.”

San Jose police Chief Eddie Garcia said he had spoken to Sanderlin, whom he praised as a "real leader," but defended the use of force.

However, protesters and civil rights groups say police instigated the violence, pointing to Sanderlin's wounding and video of Officer Jared Yuen taunting demonstrators before shooting rubber bullets at a man who had previously helped police during the unrest.

Police are reviewing the department's use of force and investigating individual events, officials said, and Mayor Sam Liccardo proposed a ban on rubber bullets.

Sanderlin felt let down by the police department and its leadership.

“It just flew in the face of everything we had talked about with the police chief, and what we tried as community members to instill in the new officers that have come in,” he said. “That really makes me sad.”

“The community was not prepared for war,” Sanderlin added. “They were prepared for their voices to be heard.”