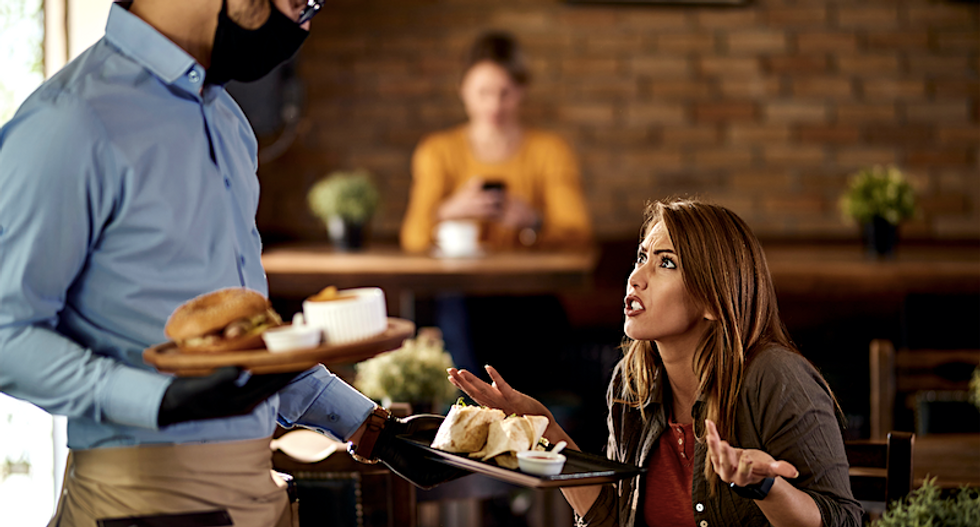 The "Karens" are back. And they're even fussier than ever.

A server named Magi, who works as a waiter at an American Chinese restaurant in Boca Raton, Florida, told Slate that entitled, easily angered customers seem to have been saving up their complaints during coronavirus lockdowns -- and are airing their grievances now that businesses are reopening.

"I feel like the fussy customers are worse than they normally were, as if they were saving these thoughts while they were in quarantine and now they’re letting it all out," Magi said. "But I will say that there are people who are so understanding and kind and compassionate. The good ones. We’ve got gloves on, we’ve got masks on, we’ve got long-sleeve shirts on, and we’re running around like maniacs, sweating, trying to accommodate everybody. Any normal, sane human being sees that and says, 'Thank you for doing this.'"

But not the "Karens."

"There was this one Karen who went out to eat with her two friends and she immediately wanted the manager," Magi said. "But she made a point to say, 'Not until after we’re done eating.' It was just crazy to me cause she was like, 'You guys reuse this [silverware]. This is so unsanitary. I need to speak to the manager.' She was mad about the chopsticks, which are made of hard plastic. She wanted the plastic forks and spoons and knives, and she made a whole big thing about it, which, again, isn’t a big deal. But she’s eating off the plates, drinking out of the glasses, sitting in the booth where multiple people have sat all night."

"To me, the logic is kind of ridiculous," he added. "You can always tell when someone comes in thinking, 'I am going to get something free from you.'"

The dining room is seated at only 50 percent capacity, and employees are constantly wiping down surfaces, washing their hands and sharing tips to help one another out -- but Magi said that same spirit of community has been lost sometime since the start of the pandemic.

"The thing that gets me is that everybody was so grateful when we were doing takeout and we were essential employees working in a pandemic," he said. "Those same people, the Karens, are the ones giving us a hard time now that we’re open for dining again."