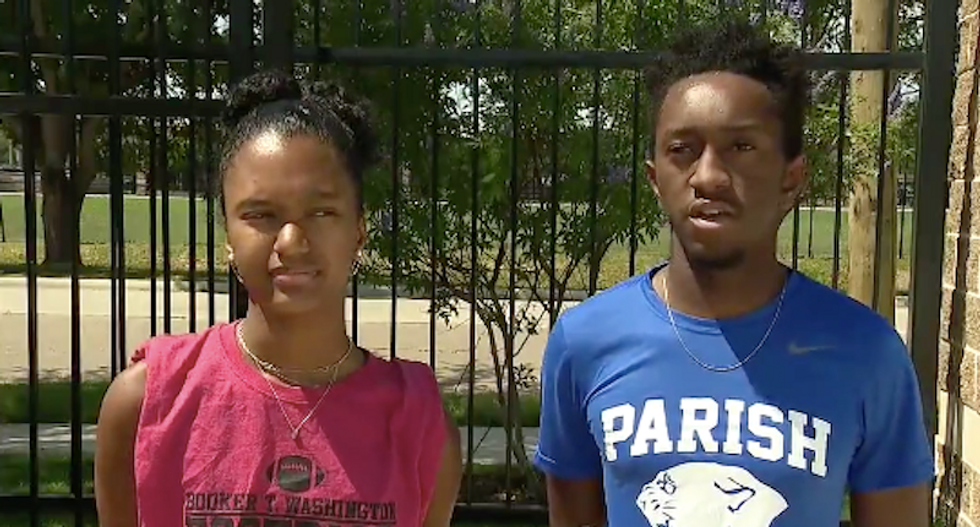 Dozens of protesters showed up to support some black Texas teens who say they were discriminated against at a fast food restaurant.

Evan Brown and Elle Grinell were celebrating their high school graduation with friends when they decided to stop at Sonic Drive-Thru in North Dallas, and they said they were mistreated moments after arriving, reported KDFW-TV.

“We were met with a car hop who told us if we didn't leave or get back in our cars that he would have to call the police on us,” Brown said.

The teens said they weren't being disruptive or causing trouble, and the employee's threat scared them.

“That is a threat to our lives with everything that is happening in the climate of the world right now,” Grinnell said.

Brown's mother went back later that evening and saw numerous teens eating and talking outside the Sonic, and she's pretty sure she knows why they were allowed to stay.

“I came back actually that evening and saw two groups of all white kids hanging out and they were not asked to leave, and certainly were not told that the police would be called on them,” said mother Shonn Brown.

The restaurant issued an apology and promised to do better in the future.

"We are revising our policy to ensure the appropriate level of manager is involved in handling matters with our guests," the company said in a statement. "We are also bolstering our training program to include consistent unconscious bias training, with a focus on the African American experience, as we foster a more inclusive environment for our team members and guests.”

But the teens' parents wanted to show that negative experience effected far more than their own children, so they organized a drive-through rally.

“We wanted to come and show our community and our friends that we support them and what happened was wrong,” said parent Karen Wade.

A Sonic spokesperson said the employee who had threatened to call police had been counseled, but offered no additional specifics.