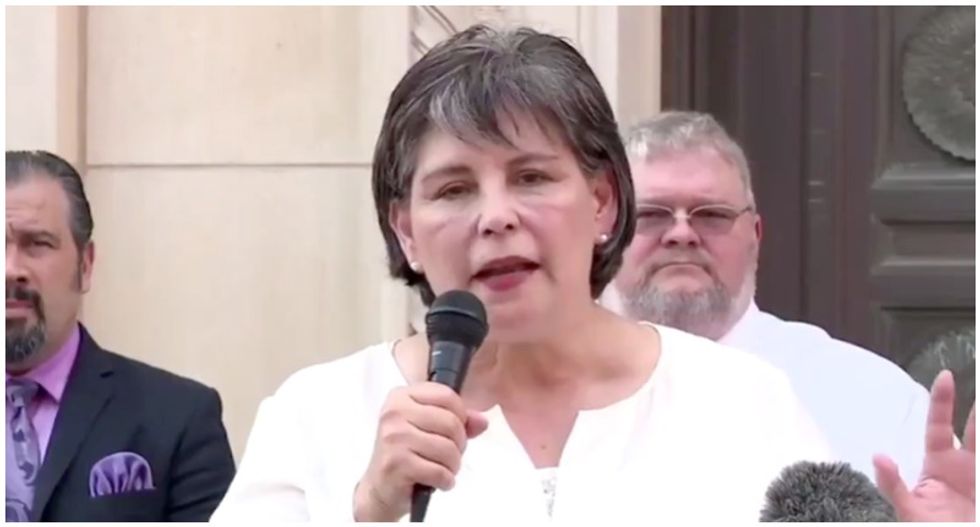 The governor of Texas is calling for the resignation of Bexar County Republican Party Chair Cynthia Brehm after she posted a conspiracy theory on her Facebook page about the death of George Floyd, the Statesman reports.

Brehm, who has claimed that the coronavirus pandemic is a Democratic hoax, suggested in her post that Floyd’s death was staged in order to damage President Trump. The post has since been deleted.

“These comments are disgusting and have no place in the Republican Party or in public discourse,” said John Wittman, who is Governor Greg Abbot's communications director. “Cynthia Brehm should immediately resign her position as chair of the Bexar County Republican Party."

The text of Brehm's now-deleted post read as follows:

“These officers were involved in something, I’m not sure exactly what, but something is just not adding up. Also this supposed officer is now missing from his home, no where to be found has the smell of MK Ultra activation. I think that there is at the very least the 'possibility,' that this was a filmed public execution of a black man by a white cop, with the purpose of creating racial tensions and driving a wedge in the growing group of anti deep state sentiment from common people, that have been already been psychologically traumatized by COVID 19 fears. Historically, in election years and politically contested areas or groups, racial or gun violence incidents are becoming common place. Considering the rising approval level of President Trump in the black community an event like this was entirely ‘Predictable.’”

As the Statesman points out, "MK Ultra" is a reference to CIA mind control experiments that were conducted from the 1950s to the 1970s.

Other Texas Republicans joined Abbot in calling for Brehm to resign.

Travis County Republican Party Chairman Matt Mackowiak tweeted, “she must resign now," adding that she's "been an embarrassment for 2 years."

&ref_url=https%3A%2F%2Fwww.statesman.com%2Fnews%2F20200603%2Fabbott-calls-for-bexar-county-gop-chair-to-resign-for-spreading-george-floyd-conspiracy-theory
Please contact support@rawstory.com for customer support or to update your subscription. Report typos and corrections to: corrections@rawstory.com.