'They are babies!' Bystanders plead with Georgia officers as they hold 5 black children at gunpoint 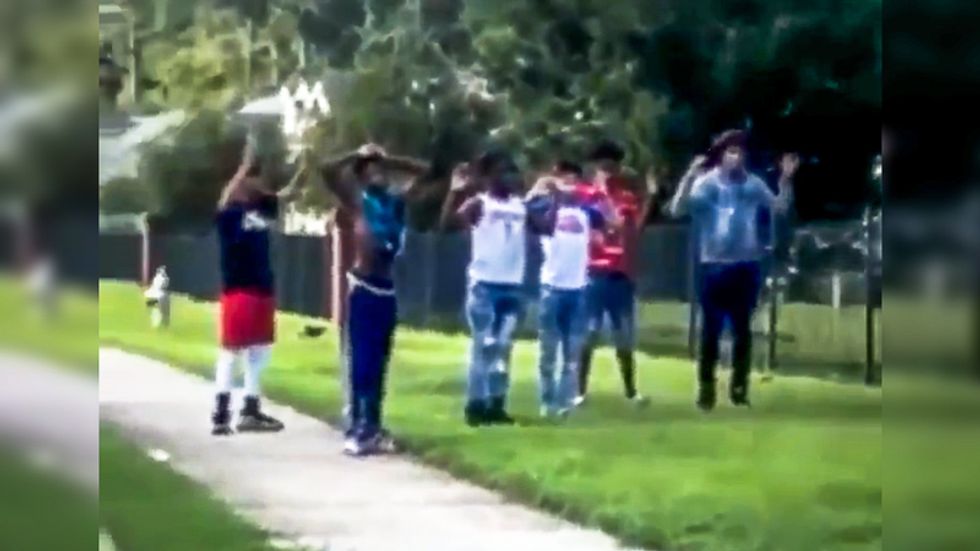 Witnesses in Clayton County, Georgia say that law enforcement officers held at least five black children at gunpoint while they were walking through a neighborhood.

Video of the incident, which was said to have occurred on Monday, was shared on Twitter early Tuesday morning.

"Today in Clayton County, GA a officer decided to pull his gun out on 5 black teenagers about 13-15 yrs old for going through the neighborhood cut to the store," a caption on the video reads. "I’m assuming he thought they were robbing a house huh? 🤦🏾‍♂️ wake up people shit is sad it’s a cut in every hood."

The video shows six children standing with their hands up as officers give them commands. At least five of the children were said to be black.

"I'm sick," a woman witnessing the event can be heard saying. "They can't. Come on, now. Please! Please, sir, they're kids."

"Why do you have a gun?" the woman asks.

"I have to check them for myself," the officer replies.

"But why do you have a gun?" the woman implores. "They are kids. What are they doing? What did they do wrong?"

"This is too much!" she exclaims as the officers frisk the kids. "They are babies!

As the video continues, the officers seem to warn the kids about cutting through the neighborhood.

In a statement on Tuesday, the Clayton County Police Department suggested that officer body camera footage would help to clarify the incident.

"The Clayton County Police Department leadership is aware of the incident and the video that is on social media involving what appears to be young teenagers," the statement said. "What everyone is seeing is a small portion of the entire incident."

The department said that it would release body camera video as well as audio of the 911 call that prompted the dispatch of officers.