‘This will not happen again’: Fox News publicly apologizes for racially insensitive graphic 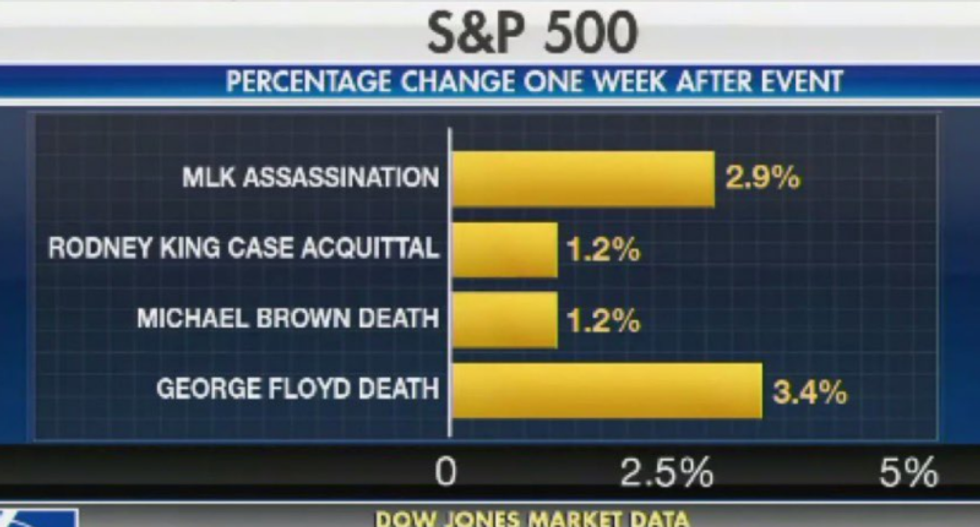 On Friday, Fox News put up a graphic comparing how much the stock market had risen after various racial tragedies, including the assassination of Martin Luther King, the beating of Rodney King, and the death of George Floyd. The graphic triggered immediate outrage.

Anchor Bret Baier issued a mea culpa on behalf of his network on Monday evening, saying, "We apologize for the insensitivity ... this will not happen again."

There’s a video going around of Jon Stewart confronting a highly influential right-wing propagandist with millions of followers inside and outside the GOP, including supporters of the former president.

I don’t need to tell you his name. I don’t need to explain the context in depth or why they found each other face-to-face or even why the former host of “The Daily Show” was blue face vein-popping angry.

From his Summers County, West Virginia, farmhouse, Mark Jarrell can see the Greenbrier River and, beyond it, the ridge that marks the Virginia border. Jarrell moved here nearly 20 years ago for peace and quiet. But the last few years have been anything but serene, as he and his neighbors have fought against the construction of a huge natural gas pipeline.

Jarrell and many others along the path of the partially finished Mountain Valley Pipeline through West Virginia and Virginia fear that it may contaminate rural streams and cause erosion or even landslides. By filing lawsuits over the potential impacts on water, endangered species and public forests, they have exposed flaws in the project’s permit applications and pushed its completion well beyond the original target of 2018. The delays have helped balloon the pipeline’s cost from the original estimate of $3.5 billion to $6.6 billion.