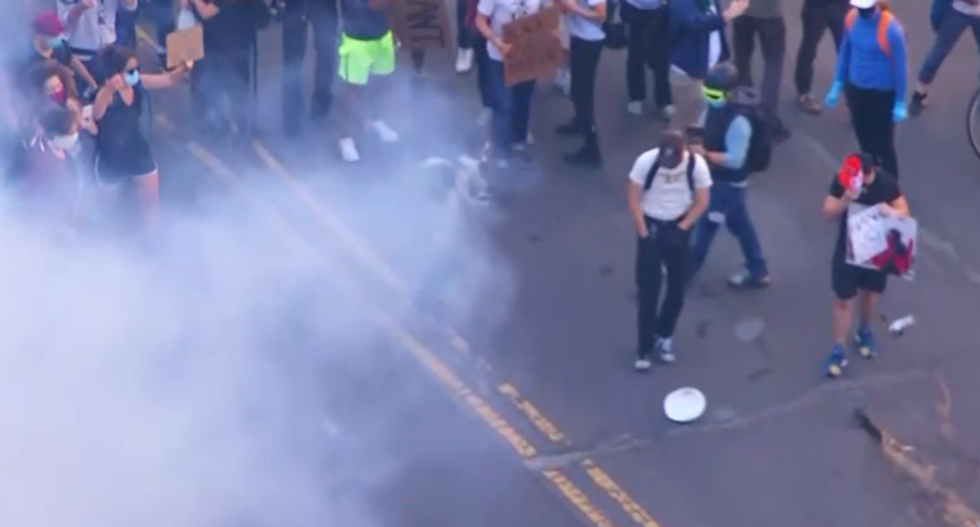 On Thursday, BuzzFeed News reported that the D.C. chapter of Black Lives Matter is suing President Donald Trump and the federal government for violating the constitutional rights of peaceful protesters at the White House.

"The lawsuit accused officers of attacking the demonstrators without warning and using excessive force — including deploying incendiary devices known as flashbangs, tear gas, smoke canisters, pepper balls, and rubber bullets," reported Zoe Tillman. "It’s the first lawsuit filed over the events in Lafayette Square on June 1, and one of the first cases seeking to hold city, state, and federal law enforcement liable for alleged misconduct during protests nationwide that have led to more than 11,000 arrests."

"Besides the local chapter of the Black Lives Matter movement, the plaintiffs in the DC case include a woman who was in the park with her 9-year-old child and other protesters from DC and Maryland who said they were injured and feared going back out to exercise their free speech rights," continued the report. "They are being represented by the DC ACLU and the Washington Lawyers’ Committee for Civil Rights and Urban Affairs."

“This case is about the President and Attorney General of the United States ordering the use of violence against peaceful demonstrators who were speaking out against discriminatory police brutality targeted at Black people,” stated the complaint, which has been filed with a federal court in D.C.