Trump upset with coverage of his health as questions swirl over his potential maladies: Maggie Haberman 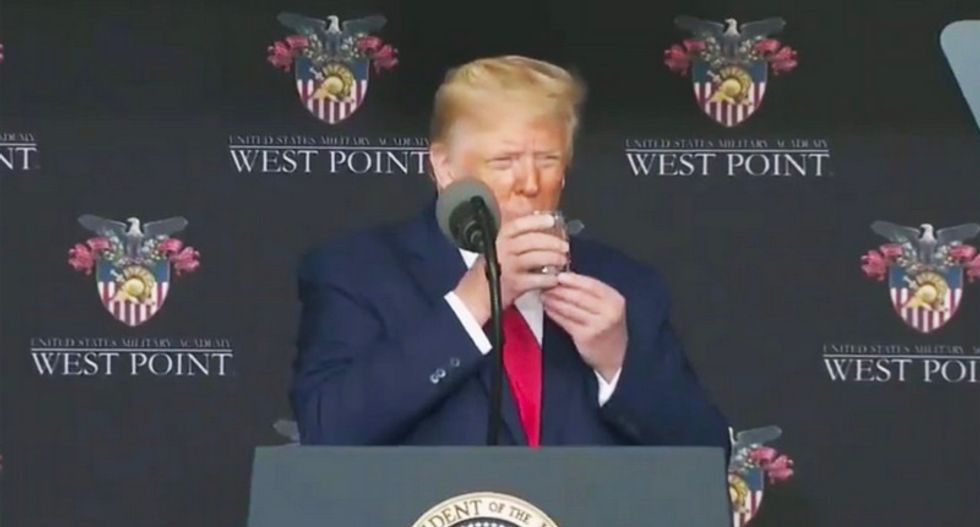 Appearing on CNN's "New Day" to discuss the state of Donald Trump's health, Maggie Haberman of the New York Times said whether the president is hiding illness or not, coverage of his problems walking down a ramp, as well as footage of him struggling to raise his right arm high enough for him to take a drink, is troubling to the president.

With CNN medical expert Sanjay Gupta begging off from diagnosing Trump, the New York Times reporter was asked about the political implications for the president.

"Perhaps no one more sensitive to how his health and stamina is portrayed in public than the president himself and you saw that in his tweet explaining this over the weekend, trying to explain that slow walk down the ramp," New Day co-host Alisyn Camerota began. "What is the president's level of concern, given that he has not been shy about attacking his political opponents as somehow not being up to the job?"

"Look, this is never coverage the president wants of anything related to his health," the reporter replied. "As you know he invited it by responding to the videos [on Twitter]. It wasn't just the video of him on a ramp; there was another video of him having trouble lifting a water glass to his mouth, where he had to use his left hand to basically finish helping his right arm guide it to his mouth at a speech at West Point -- he never likes coverage like this."

"As I said, he invited it by tweeting about it," she continued. "I think Sanjay is right. We don't know what the issue is, we don't know from looking at this video. We know the president has had issues with stairs before, but as Sanjay also says, there are a lot of questions around the president's physical fitness, because he has dictated a note to a doctor in 2016, because he had this still unexplained, other than saying he wanted to get a jump on his physical, abrupt visit to Walter Reed [Hospital] last year."

"Look, it is perfectly legitimate for them to raise questions about Joe Biden's health. He's 77 years old. But it's also legitimate to ask about this president's," she added.