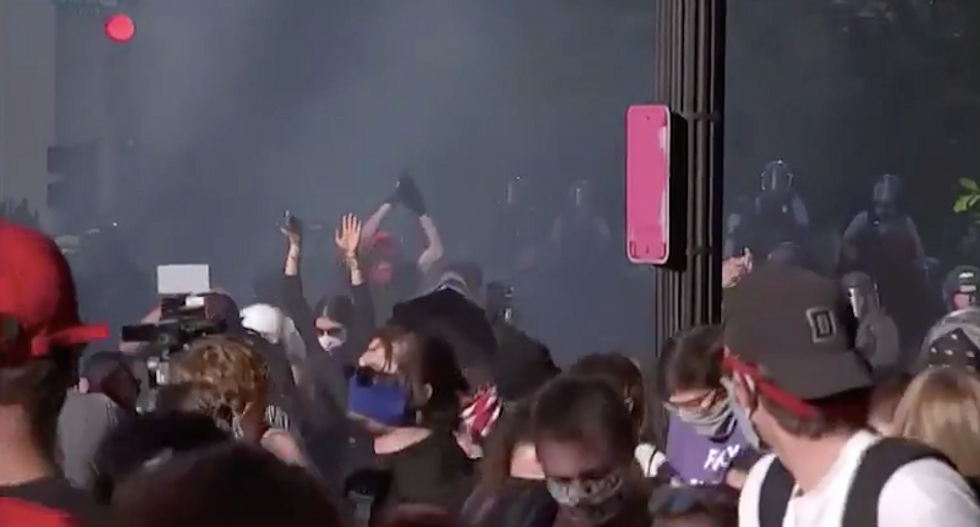 Although at least one senior official was sickened by President Donald Trump's walk to St. John’s Episcopal Church, a White House reporter said most officials were pleased that it set a brutal example.

The president berated governors in conference call earlier Monday, saying they looked weak in the face of widespread protests against police brutality, and Pettypiece said the White House hoped to set an example.

"This use of force is the type of force they say the president wants to see other mayors using," Pettypiece said. "So this, they see in the White House and Trump's world, as a victory, just that thinking to give you an indication of where this is going, to give you color of what it is like being here at the White House while all this was unfolding yesterday."

Pettypiece said that she and other reporters felt physically brutalized while performing their duties.

"You could hear those flash bangs while the president was speaking in the Rose Garden, to the point they almost rattle your chest," she said. "The flash bangs are so strong, you could smell the pepper spray on the White House North Lawn as the president was walking, starting to make his way across the park. During his speech, there is a roar of helicopters, there is the constant drone of sirens. That is the atmospherics here."

None of that was accidental, she added.

"When I talked to one person close to the White House, you know, was that a problem?" Pettypiece said. "No, they liked that. They thought that atmospherics, that chaos, that brutality going on was what they wanted to see and the message that they wanted to send."

Associated Press reporter Jonathan Lemire heard the same thing from White House officials, who told him the president wants to use the military to make himself look strong.

"Yesterday, indeed, was a photo-op," he added. "The White House has already put out video, slow-motion video, of the president strolling across Lafayette Park. It was a taxpayer funded photo-op we saw yesterday. One Trump senior adviser said this to me, actually, there were two photo-ops. Yes, the president in front of the church with a Bible, we wanted that. The other photo-op was clearing the park, the display of strength and American might."