'Trump's legal goon' Bill Barr needs to be impeached before he corrupts the election: ex-FBI agent 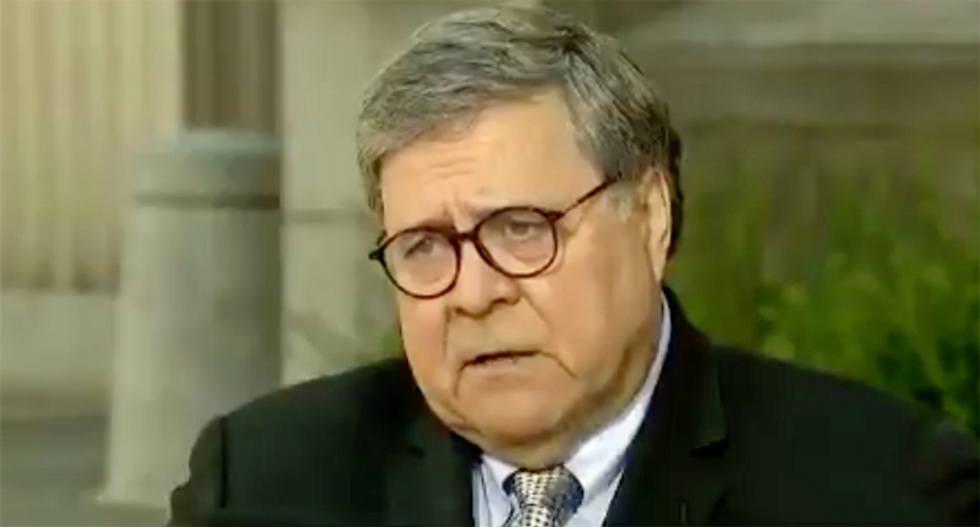 Attorney General William Barr appears to be obstructing justice, according to one legal expert, and must be investigated and possibly impeached.

The attorney general gave conflicting statements over the weekend about the ouster of Geoffrey Berman, the U.S. Attorney for the Southern District of New York, and attorney and former FBI agent Asha Rangappa called for Barr's removal in a new column for The Daily Beast.

"Barr tried to bamboozle the country (and, apparently, bully Berman himself) into believing that Berman had resigned his post," Rangappa wrote. "Berman’s day-long standoff with Barr, in which he refused to resign, included a public letter that was an S.O.S. to anyone paying attention, as he assured the public that the 'office’s important cases would continue unimpeded' — suggesting that Barr was attempting to obstruct justice by removing him, which Barr ultimately succeeded in doing."

Barr has authority over any Justice Department investigation of his own conduct, and Rangappa argued that leaves only one option to determine why the attorney general removed Berman.

"That leaves just one last option: impeachment," she wrote. "House Judiciary Committee Chairman Jerry Nadler has stated that pursuing impeachment against Barr would be a 'waste of time' because the Senate would never vote to remove him. That may be true. It may also seem pointless to begin impeachment with an election only five months away. But that approach misses the point, and the urgency."

"Barr has the potential to inflict more damage on the U.S. than even the president because he can use the levers of justice to stonewall investigations, bury evidence, and provide a veneer of legality to illegal acts," she wrote. "Even if he isn’t ultimately removed, an impeachment hearing brings some measure of accountability to Barr, by making public the myriad ways he has subverted the administration of justice by acting as Trump’s legal goon."

"As Adam Schiff stated in his closing statement in the Senate’s impeachment trial for President Trump, 'No constitution can protect us if right doesn’t matter anymore,'" Rangappa added. "Right matters. It’s time to impeach Bill Barr."