‘Turned his back on America’: MSNBC’s Morning Joe and Mika bash Trump for his 'incredible shrinking act' as the country burns 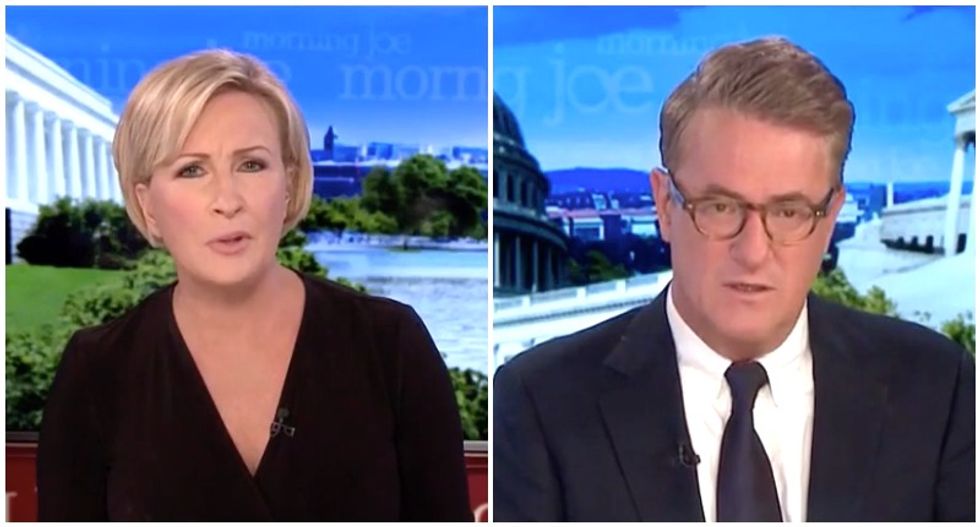 The "Morning Joe" co-hosts were astonished that Trump spent the weekend tweeting incendiary comments instead of addressing the protesters' concerns, and they agreed that he had shrunk from the coronavirus and racism crises engulfing the nation.

"It's sort of two things going on," Brezezinski said, "this sort of sowing fear and hate and sowing the violence on Twitter, and, yet, a lot of people felt during the moment at the Rose Garden on Friday, when he chose not to speak about George Floyd and everything that was going on, and he turned around and walked away, turned his back on America, the questions started popping up. Is he afraid to do anything? What is holding him back?"

"Through our worst times, through our worst times as a country these past three months," she added, "it seems he is in a state of withdrawal at all times, whether it be stepping up on testing and nationalizing it, getting this going, moving us through the virus and the pandemic, or withdrawing from the [World Health Organization], or withdrawing from the opportunity to calm Americans' fears and try to calm the situation, he turns and walks away."

Scarborough ridiculed the president for tweeting his way through historic crises.

Meacham compared the situation to the crisis that drove President Lyndon B. Johnson out of public life.

"I hate to throw his predecessors into the corner with him, but this is a lot like the spring -- winter and spring of 1968 -- when President Johnson left the race, functionally resigned, when you think about it, having won so big in 1964," Meacham said. "As we talked about, you know, James Reston wrote the morning after the '64 election, conservatism was dead in America for a generation. Fewer than four years later, President Johnson, because of Vietnam, because of the riots, because of the backlash, which was a phrase that came into the vernacular, about white workers lashing back at black workers who might be taking their jobs, which was a not necessarily Southern phenomenon but also a national one, that wild complexity of issues functionally drives President Johnson out of office."

"It takes him out of the presidential race, given the way Lyndon Johnson was wired, for him not to be able to run for office was almost a death sentence," he added. "In fact, he did die within five years. But that was a moment where circumstances engulfed Johnson, who had done immensely important things on the home front. so that's where the analogy breaks down."