WATCH: Susan Rice says officials who did not brief Trump on Russian plot ‘should be run out of the White House’ 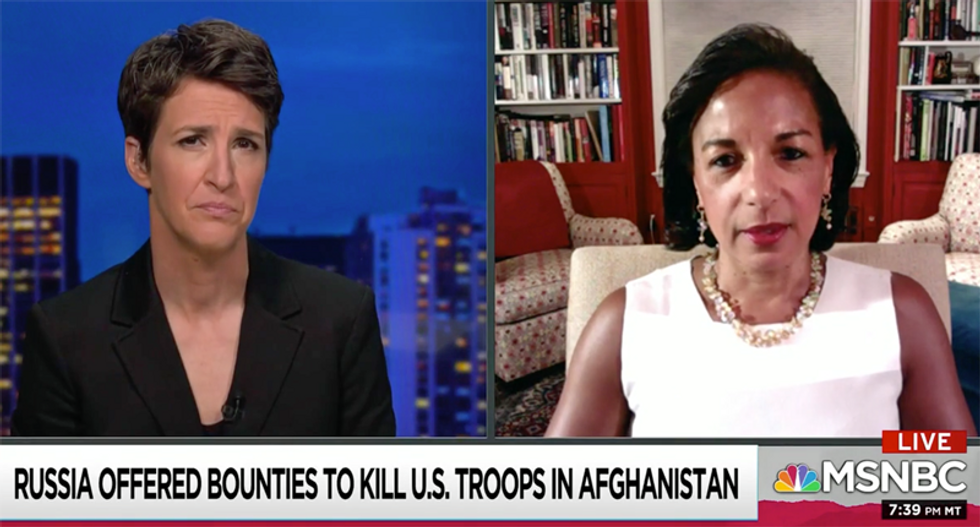 Rice was interviewed by the host of "The Rachel Maddow Show" on MSNBC.

"So, let me explain this. Intelligence comes in, if it's put in the President's Daily Briefing, which is a short but important summary of the most important information, it's provided to the president, the vice president, the National Security Adviser, Secretary of State, Secretary of Defense, on down," Rice explained. "Everybody in the senior national security team gets this briefing six out of seven days a week."

"So even if the president doesn't read his PDB, as it's known, which apparently he doesn't often do, then surely someone around him would come in with this information and make sure that he was aware," she continued.

"If I had been National Security Adviser and we received this kind of report, of an arch adversary trying to kill U.S. forces, the first thing I would do is walk into the Oval Office and say, 'Mr. president, we have extremely troubling information that the Russians are trying to slaughter American forces by paying bounties to the Taliban. I will work with the intelligence community to chase this down and try to ensure that our information is solid. I will convene the National Security Council principles to work up options for you to respond, but please understand how serious this is.'"

"And then, Rachel, if down the road he decides he wants to call Vladimir Putin at least six times over the next few weeks -- which apparently he did -- and invite him to the G-7 over the objections of all of our allies, I would have gone right back in there and said, 'Mr. President, what are you doing? We warned you that we believe that Russia is up to this effort to kill Americans and still you're going through these ridiculous efforts to hand Putin an olive branch? Please stop and please be prepared not to reach out, but to punish, if necessary."

"You know, the job of the National Security Adviser, not to mention the Director of National Intelligence, Secretary of Defense, any number of other officials, is to tell the president the hard truths that he may not want to hear and produce a plan to address them," Rice said. "That's the job."

"If those people are not doing it, then they all should be run out of the White House and the rest of the agencies," Rice said. "And if they did do it, which is what I believe is more likely the case, then again, we have evidence of a president utterly unwilling to stand up for American interests and rather serving Vladimir Putin's interests."