WATCH: White man jumps out of Uber to confront Kentucky protesters -- gets punched and then punished by employer 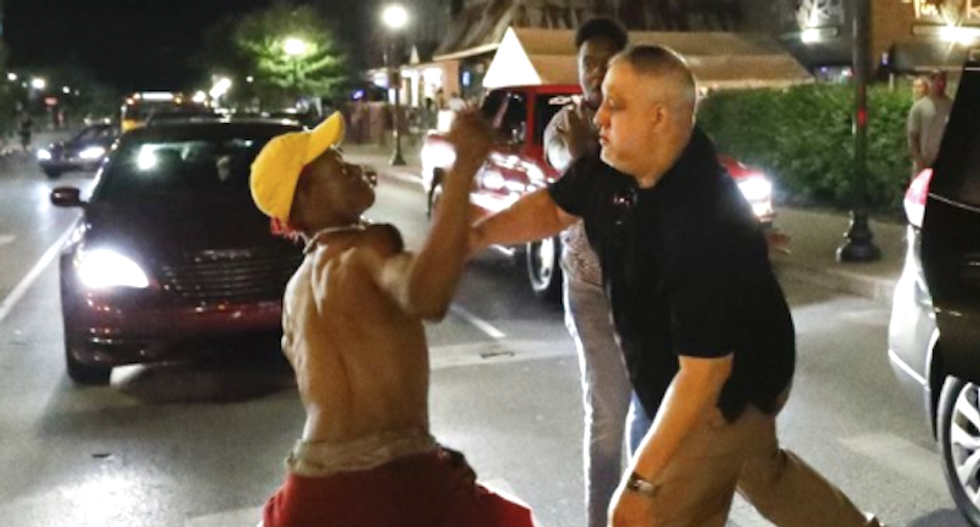 A white man jumped out of an Uber to berate protesters in Kentucky -- and then a fight broke out in the middle of the street.

Uber driver Mohammed Amidu stopped at a red light late Saturday in downtown Lexington, and he said protesters then peacefully moved through the intersection while the car was stopped, reported WKYT-TV.

Protesters remained in the intersection as the light changed to green, and Amidu said one of the passengers, 46-year-old Jason Ritter, jumped out of the back seat and began wagging his finger and yelling at protesters.

Ritter later said protesters had been taunting him through the window, and he said he feared for his wife's safety before jumping out of the car to confront the group.

Protesters ran toward the confrontation and tried to separate Ritter from a black man in the group, and Ritter said he only threw a punch after the other man hit him first.

Ritter's face was bloodied and he was treated at the scene for minor injuries.

No arrests have been made in connection with the fight, but one of the individuals involved, 19-year-old Kaulbert Wilson, was charged with assault, inciting a riot and other charges following Monday night's protest.

Ritter's employer later imposed unspecified disciplinary action against him over the fight.

"Harbor Freight condemns this individual's actions and finds his behavior and statements offensive," said company spokesman Craig Hoffman. "This conduct does not represent our views at Harbor Freight, where diversity is one of our core values, and we have taken appropriate action regarding this individual."