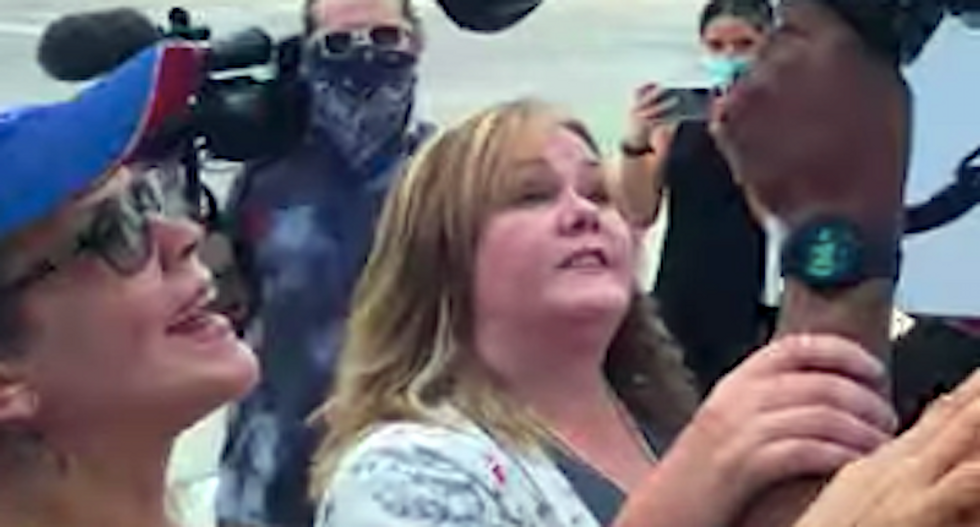 A group of anti-mask protesters attacked a Black pastor during his weekly demonstration seeking reparations for the 1921 Tulsa race massacre.

Rev. Robert Turner, pastor of Vernon AME Church, has protested outside City Hall each Wednesday since September 2018, but this week his demonstration was disrupted by a group intending to protest Tulsa's newly enacted mask mandate, reported Tulsa World.

"My very presence was the catalyst for an onslaught of anger and hate from my fellow children of God," Turner told media outlets in a statement.

"Today, people shouted ‘USA’ at us as though it was an attack — as though the United States was no place for Black men seeking justice," the pastor added.

Turner shared a video of the encounter that shows anti-mask protesters -- many of them wearing clothing that shows support for President Donald Trump -- chanting "USA" to drown out the pastor's call for reparations over a megaphone, and one man dangles a dollar bill to mock him.

"How much do you want?" the man says.

A white woman positions herself directly in front of the pastor and jabs a finger at hime, and leans in without a mask to yell at him.

The pastor urges the mostly white demonstrators to wear a face mask, as he is during the encounter, and one woman reacts strongly.

One middle-aged white man walks up behind Turner and begins wordlessly screaming, over and over, until another anti-mask protester pulls him away and tells him that's enough.

"F*ck them, they get violent," he says. "Violence helps him."

Another white man walks up and offers the pastor his credit card, and Turner walks away, while a white woman starts ranting about abortion.

“The racism that destroyed Black Wall Street in 1921 is alive and well in 2020," Turner said in his statement afterward. "I have never, in person, seen mobs so filled with hate as I did today. I hope our city leaders will stand-up and repudiate the racist attacks we endured today on the steps of city hall.”

One demonstrator threw a water bottle at Turner, and two women grabbed his arms and megaphone insisting that they talk to them.

"This is not a good look for this group," one social media user posted later, along with a link to Turner's video, on the Facebook group for Tulsa Citizens Against Mask Mandates.

However, one of that Facebook group's administrators insisted that Turner had not been assaulted during the confrontation and said the anti-mask protesters were the real victims.

"(Turner) turned his megaphone to full blast and verbally assaulted all of us," said group administrator Debbie Robertson. "He said all whites are racist and must pay him reparations. He was so loud we could not hear our people speaking on our small sound system."

"We were peacefully protesting," she added. "He could have chosen a different corner but deliberately walked right into our crowd and started all that. I tried to talk to him."

Turner said he plans to press for assault charges, and police said they had received a complaint that someone tried to disrupt a protest, but officers arrived and left the scene after a few minutes.

It's not clear whether a police report has been filed.