'Burn it all down': Conservative calls for purge of every one of Trump's Senate enablers 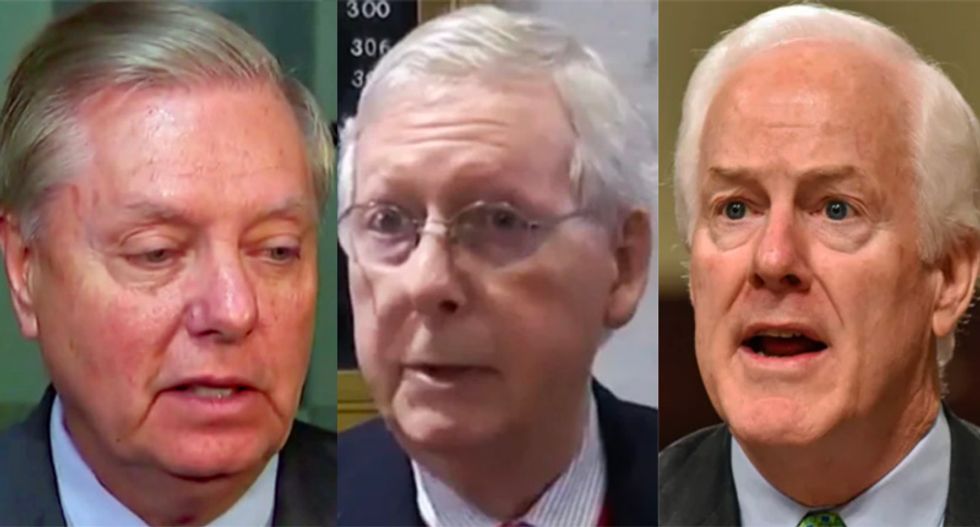 In a call to arms to conservatives, Bulwark founder Charlie Sykes said that it is not enough for Republicans to reject Donald Trump in November and that the president's enablers in the Senate need to be sent packing too.

Taking issue with fellow Never-Trumper Matt Lewis, who writes for the Daily Beast and pinned the blame for the state of the nation on Trump but warned against making wholesale changes by replacing GOP senators, Sykes wrote ousting Trump is not enough.

"Let’s leave aside the question of whether the deaths of nearly 150,000 Americans can be considered a 'lethal' consequence," of backing Trump," Sykes wrote, "Lewis is among the anti-Trump critics now warning against punishing the GOP too severely for its cowardice, lack of character, and submission to Trumpism."

Asking, "Can you defeat Trumpism by defeating Trump but leaving his bootlickers in power?" Sykes was blunt in answering his own question.

Pointing out, "Some have simply fallen silent, while others have turned themselves into low-rent internet trolls," Sykes added, "... they have squandered their credibility. Only the profoundly naïve can imagine a John Cornyn making a credible case against executive overreach; or Kelly Loeffler for ethics in government; or Lindsey Graham defending the rule of law. Which Senate Republican would not be laughed off the stage if he or she attempted to warn now against the dangers of an exploding national debt?" Sykes admitted that their replacements may not be better, but that was beside the point if traditional Republicans wish to remain a viable political force.

"If the GOP does not somehow renew itself—by purging the foul air of its current corruption—it will find itself in the wilderness for the next 40 years as it tries to explain its history of Vichy Trumpism," he wrote before praising Senator Mitt Romney (R-UT) and "smart, principled, competent Republican governors like Larry Hogan (MD), Charlie Baker (MA) and Phil Scott (VT)" for being shining lights during the pandemic disaster under Donald Trump.