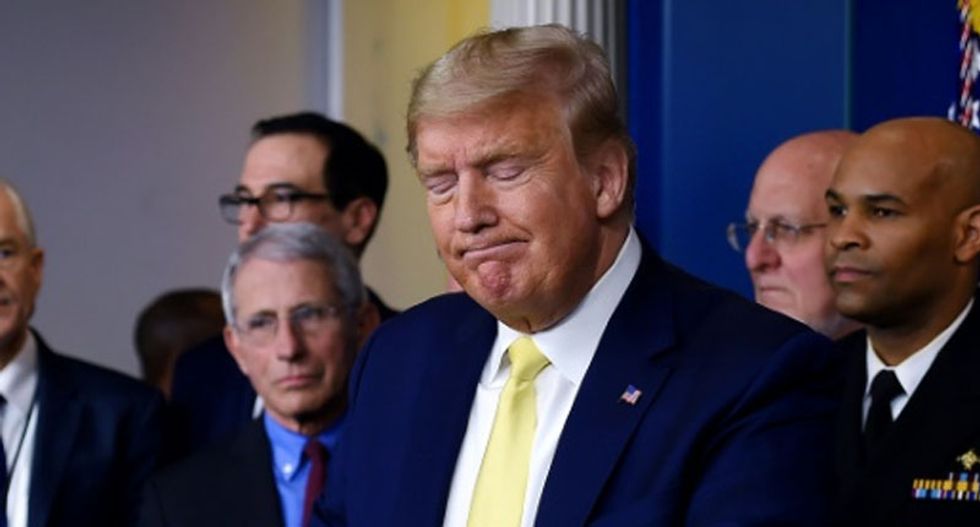 Economics columnist Catherine Rampell wrote in the Washington Post Thursday that she sees a ticking timebomb ready to explode on the American economy.

It was revealed that the U.S. was able to add 4.8 million payroll jobs in the month of June, but there's a question of whether those jobs were merely people who were laid off or furloughed and whether those are new jobs or just existing ones. Either way, it shows a slight reduction in an unemployment rate that hit 14.7 percent in April.

"Unfortunately," Rampell wrote, the new employment numbers mean "diddly squat for those still out of work."

To explain just how bad things are and how it compares with previous depressions, Rampell showed what she said is the scariest jobs chart you'll see all day. 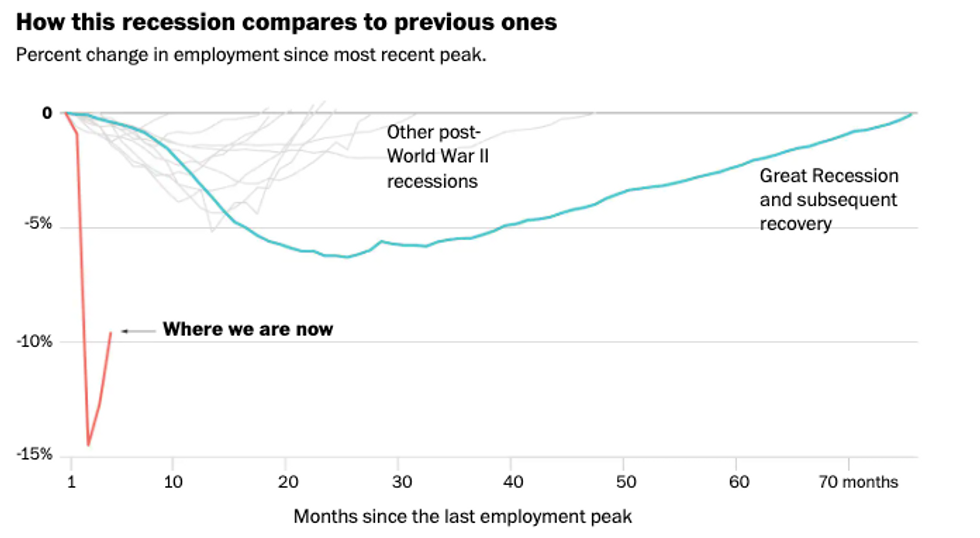 (Chart via the Washington Post)[/caption]

"The horizontal axis shows months since the most recent employment peak of a given business cycle," she explained. "The teal line plots the Great Recession. Until recently, the depth, duration and sluggish recovery from the Great Recession had put all other postwar downturns to shame. Take a look at the red line, which represents the awful situation the country is now going through."

She called things "so much worse" than most truly understand. In fact, they're worse than even the Great Recession in 2007-2008. The red line above almost doesn't even fit in the chart, she noted.

Americans should all be thankful to see numbers go up, but there are still 14.7 million Americans, or about 10 percent of the country, still struggling. There's a fear that 1 in 5 renters in the country will be evicted by Sept. 30.

"Even if job growth continues at what President Trump calls 'rocket ship' pace, the country still has a long way to go before reaching an acceptable altitude — that is, until U.S. payrolls are anywhere near pre-pandemic levels."

Then there's the fear that the so-called "rocket-ship" could actually slow down as the pandemic surges to even greater levels.

"Since mid-June, confirmed coronavirus cases have surged, especially across the Sun Belt," she wrote. "Some states have halted or even reversed their reopening plans, especially in the industries that reported the greatest job gains at mid-June: Leisure and hospitality, which according to Thursday’s jobs report shows as adding 2.1 million positions in June, accounted for two-fifths of the overall gain in total payroll jobs. But Florida and Texas, for instance, once again shut down on-site bar drinking. On Wednesday, California’s governor directed 19 counties to shut down indoor family entertainment venues (bowling alleys, arcades, etc.) as well as indoor dining at restaurants. In the near term, this will hurt the industry’s business activity and hiring."

She noted that there is evidence that shows consumer confidence is what is sustaining the economy far more than government action. Meaning, no matter what President Donald Trump does, if people are too afraid to get out of quarantine, it won't matter whether bars and businesses reopen or not.

She cited a University of Chicago working paper from economists that used cell phone data from SafeGraph to show that consumer traffic fell by 60 percent, but “legal restrictions explain only 7 percentage points of this. Individual choices were far more important and seem tied to fears of infection.”

Trump is hanging his hat on the idea that the economy is "roaring back," with historic jobs numbers.

The data shows that foot traffic to businesses has leveled off and consumer spending not only stopped increasing, it has actually started to decrease.

A troubling sign for the recovery: consumer spending has not only lost momentum but according to JPMorgan, the pull… https://t.co/Uf8RqqbIKj
— Steven Rattner (@Steven Rattner)1593626336.0

“While cities like New York and San Francisco had lower troughs, they’ve steadily improved, while cities like Houston and Phoenix have plateaued or given back some of their early gains,” Homebase analysts said in a June report. “These plateaus suggest we may have ~20% permanent closures on Main Street.”

Read the full shocking details at the Washington Post.