‘Insane’: Park ranger shoots unarmed man through his heart and then handcuffs his dead body 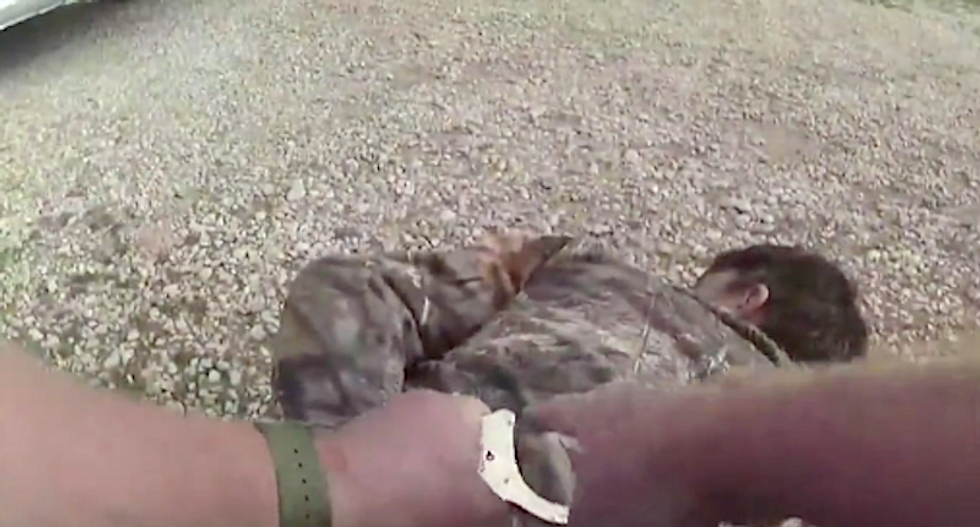 A ranger at Carlsbad Caverns National Park tased and then fatally shot a man during a New Mexico traffic stop and then handcuffed his lifeless body.

Charles "Gage" Lorentz was traveling March 21 from his work site in Pecos, Texas, to his family's home in southwest Colorado when he detoured at the national park to meet a friend, and that's where he encountered National Park Ranger Robert Mitchell, reported KOB-TV.

The ranger stopped the 25-year-old Lorentz for speeding on a dirt road near the park's Rattlesnake Springs area, and Mitchell's lapel video shows him ordering Lorentz to spread his feet and move closer to a railing.

Lorentz complies with the order, but he briefly dances to music coming from a nearby vehicle before calmly refusing to turn around.

Mitchell then appears to draw his Taser as he continues to ask Lorentz to turn around, prompting a puzzling response.

"Oh, come on, get real with it," Lorentz said, appearing to ask Mitchell to draw his handgun instead. "Other one."

Mitchell refuses, and then, without warning, the ranger suddenly uses his Taser on Lorentz.

The video abruptly cuts off at that point, and when the video resumes 26 seconds later Mitchell is shown on top of Lorentz, and the ranger then shoots him twice with his service weapon.

"That's when I shot him with a Taser, it did nothing," Mitchell tells an Eddy County sheriff's deputy later, which was also caught on video. "I went dry stun, he hit me somewhere right here on the side of my head. The fight was on, he grabbed me around the neck, he tried to push my head into the push bar, and I came up and fired one round. I don't know if I got him or not, but I definitely got him on the second one and he crumpled.”

Lorentz was unarmed, and a toxicology report showed no alcohol or drugs in his system.

An autopsy showed the first bullet struck his thigh, but would have been a non-fatal injury because it missed all major arteries.

The second shot went through his heart, killing Lorentz.

The National Park Service and Dianna Luce, the 5th Judicial District Attorney, confirmed the shooting remained under investigation by the U.S. Attorney's Office, which is trying to determine whether Lorentz's civil rights were violated.

Lorentz's family plans to file a lawsuit against the United States Interior Department and National Park Service, saying the ranger acted without provocation.

“Let's start with the fact that this man takes a Taser and shoots Gage with no provocation from Gage whatsoever,” said attorney Shannon Kennedy. “There is no communication, there is no de-escalation. That park ranger is insane, he's out of his mind. What is he arresting him for? Driving too fast down a country road, and he takes his life over that? It's a citation, it's a warning. It's not a death sentence.”