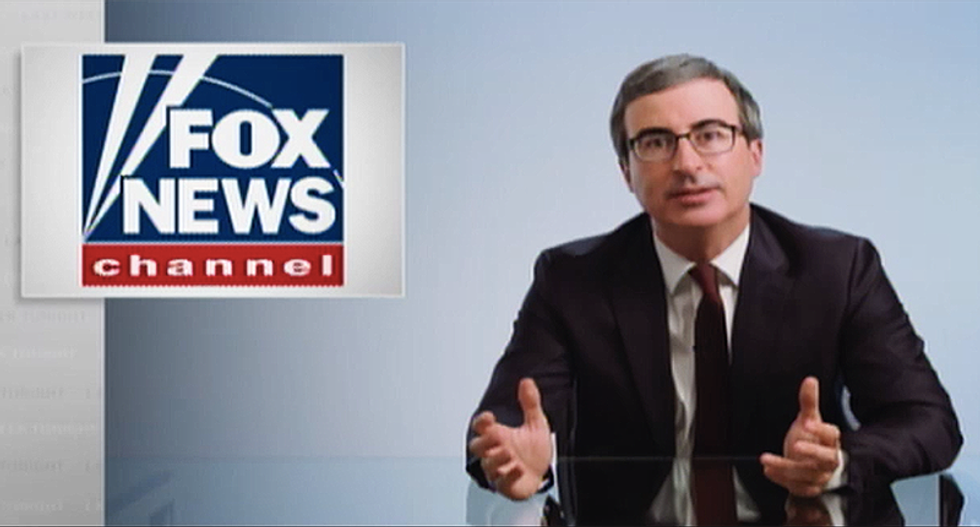 Sunday's "Last Week Tonight" with John Oliver began with a takedown of Fox News hosts for clutching their pearls and collapsing on a fainting couch about graffiti on courthouses.

At the top of his show, Oliver explained that the protests in Portland have been described by President Donald Trump and his Fox News campaign surrogates as being the downfall of society. He showed the recent clip of a Navy veteran being beaten with nightsticks and sprayed in the face with teargas when he was calmly trying to have a conversation with the agents.

"Wow! That is intense," Oliver said after showing the footage. "And frankly, it says so much about the country right now when CNN will show federal agents treating a human being like a piñata, yet censor that same man for rightfully telling those agents to f*ck the f*ck off."

He explained that we're all witnessing the rapid decline of civil liberties in the United States, and told CNN that there is no reason to be prudes about it.

The protests, which have been going on for about two months since the slaying of George Floyd in Minneapolis, only occurs around a one-block area. But according to Trump and Fox News, the entire city of Portland is under assault by soldiers who "hate our country" and "scam mothers."

Trump claimed he had "no choice," and it was a "terrific idea" to invade the city.

"OK, first, it's never good when Trump claims he's doing 'a great job,' given that he thinks his administration is 'doing a great job with coronavirus' and he once proclaimed that Ben Affleck would do a great job as Batman," said Oliver. "Clearly, this man has no sense of what a 'great job' actually looks like."

The agents that Trump says were "called in" were actually not called in. In fact, they were told to leave and taken to court demanding they stop throwing people in unmarked vans.

"Yeah, masked individuals throwing people into an unmarked van is never a good idea if you want to deescalate the situation," said Oliver, noting that it's not even a good idea for a bachelorette party.

Protests there have been mostly peaceful with only a few "isolated and chaotic incidents" mostly exacerbated by the police, who actually even teargassed the mayor himself. Meanwhile, police are complaining about people throwing things at them like a can of White Claw and a half-eaten apple.

Oliver explained to the Portland PD that they're less of a threat and more of an invitation to summon the ghost of someone who died on day 3 of Burning Man.

But if you watch Fox News, "it's the end of America as we know it."

Oliver showed clips of Lou Dobbs calling the city of Portland "under siege."

Right-wing attorney Emily Compagno called it "a war on the streets of Portland."

But it was Trump campaign volunteer Sean Hannity who listed off the "violent attacks" on courthouses across America that prompted Trump to send in the armed guards. It's almost entirely based on cases of graffiti. In one case, Hannity claimed that the Hatfield Courthouse was "firebombed," when reports are that they were actually fireworks.

"Police were attacked by lasers," Hannity said, breaking the news that apparently cat toys could endanger the lives of police officers. "This is insane."

"Yeah, it is insane," said Oliver. "Because that tone does not honestly reflect the situation on the ground. That firebombing, for instance, seems to be a reference to either a firework or a small fire that was set, which is significantly less dramatic than he's trying to make it sound. And that rolling list next to Hannity's head is mostly graffiti. In fact, graffiti is listed 12 times in a row there under 'Violence in Portland,' which is a huge overstatement. At that point, it would have been just as accurate to say 'cannibalism in Portland,' or 'Texas-chainsaw massacre in Portland,' or '9/11s in Portland.'"

He closed by saying that Portland seems to be being used as a staging ground to put on an authoritarian show of force. Oliver warned it could end very badly.