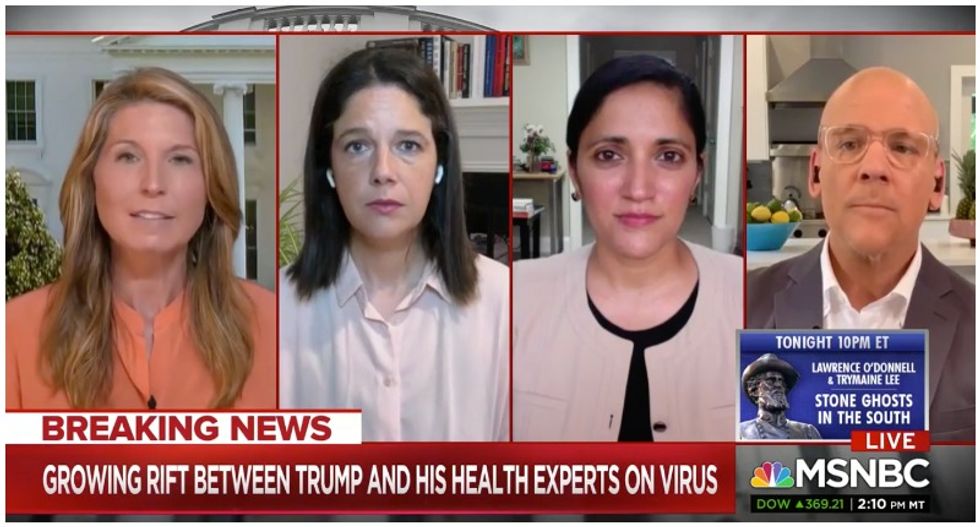 During a segment on MSNBC this Friday, Nicole Wallace and guests discussed President Trump's recent claim that doctors who administered him a recent cognitive test were “very surprised” that he “aced” it.

MSNBC contributor John Heilmann sarcastically speculated what the test must have looked like.

The Washington Post's Ashley Parker said that the actual test was part of Trump's routine physical and it's designed to detect early signs of cognitive decline. She said that reporting revealed that Trump is constantly bragging to White House staffers about how well he did on the test, and even suggested that his results should be compared with Joe Biden's.

According to former Obama health policy director Dr. Kavita Patel, the doctors were probably "very surprised" that Trump did well on the test considering his questionable behavior.

Wallace pointed out that Trump's praise of a cognitive test administered by doctors is in direct contrast to his disparagement of science, and doctors such as Anthony Fauci. Heilmann agreed, saying it's just another example of Trump's "pathological" narcissism.

"Everything in the world, if it benefits Trump in some way, is valid," Heilmann said. "Anything that doesn't benefit Trump is invalid."