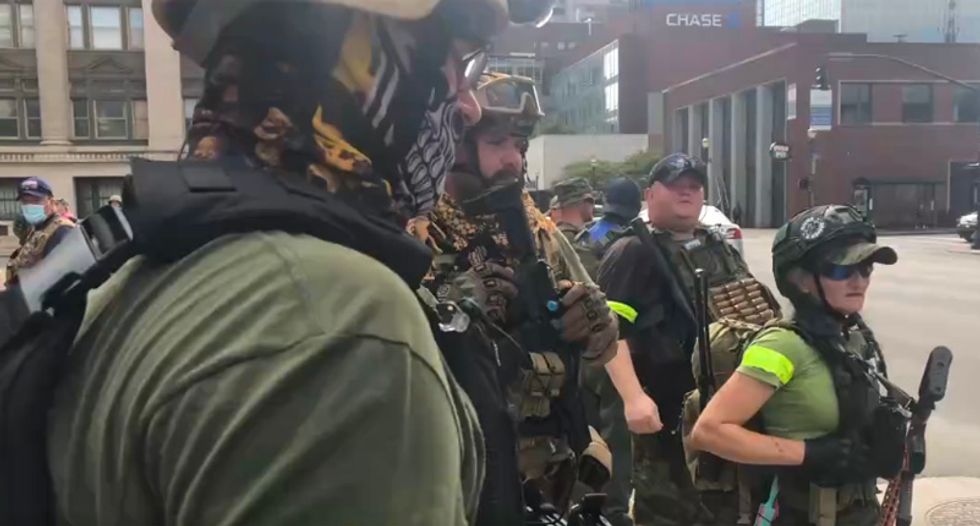 According to Jessie Cohen of WHAS11, at least two attendees at a planned protest in Louisville were shot and taken to the hospital as rival armed militias faced off and police stood by.

As Cohen tweeted, "We just watched two people be taken onto stretchers at Baxter Square on 12th and Jefferson. Metro safe has confirmed reports of shootings & that there are multiple victims. We heard the noises when people scattered to get behind cars, & to take a knee."

According to a report at the Daily Beast, the protest against police brutality resulted in a stand-off between "the Not F**king Around Coalition—an all-Black armed militia founded by Atlanta-based rapper and DJ John 'Jay' Johnson," and members of the conservative Three Percenter militia group.

An updated report from MSNBC claimed that the shooting was "accidental" and three members of the NFAC were wounded.

The Beast reports that Saturday's protest at Jefferson Square Park was scheduled to start at 11:30 AM but, "before NFAC had even started their march, police in riot gear had erected a barricade to separate the Three Percenters from Black Lives Matter protesters, which did not stop the opposing sides from chanting and yelling at each other. One Black Lives Matter protesters who tried to walk through the police barricade was arrested."

This story will be updated as more information becomes available...

You can see some video from the scene below via Twitter:

2020 Election Guns
Please contact support@rawstory.com for customer support or to update your subscription. Report typos and corrections to: corrections@rawstory.com.