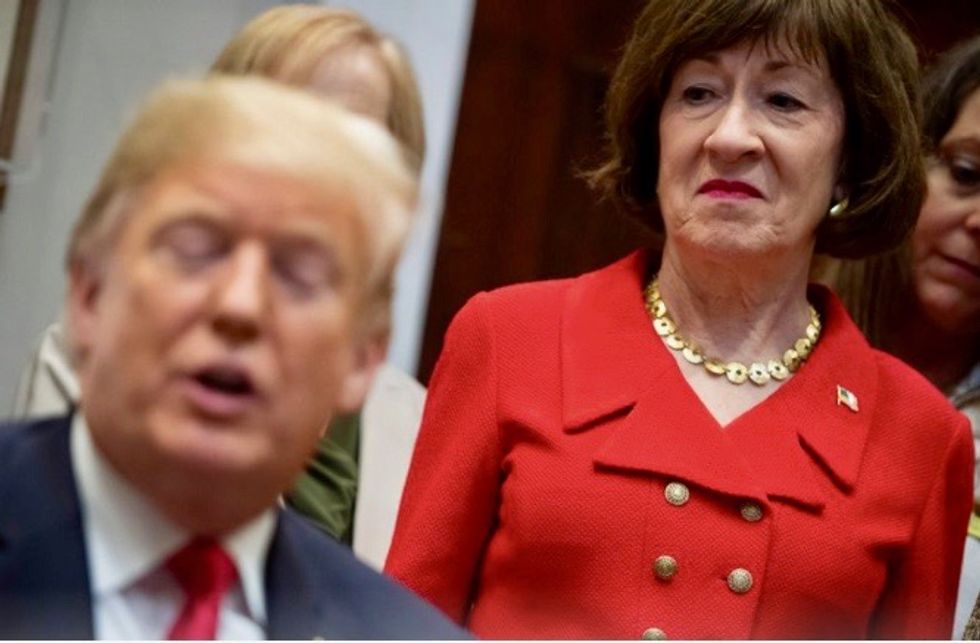 MoveOn says voters are "fed up" with GOP senators from the battleground states of Arizona, Maine, and North Carolina "carrying water for him as he trundles toward authoritarianism."

President Donald Trump's brutal ongoing crackdown on protests in Portland, Oregon and his threats to send federal agents into other major U.S. cities in the coming days could have electoral consequences for not only Trump but also vulnerable Republican senators in key battleground states who are up for re-election this November, according to polling released Friday by MoveOn Political Action.

"These results show that Trump's plan to use unidentified federal agents to suppress local protests is backfiring with the public."

Public Policy Polling (PPP) this week surveyed registered voters in Arizona, Maine, and North Carolina, and found that majorities in all three states oppose Trump's deployment of federal agents in Portland. Some critics have charged the president's tactics are part of a ploy to sow chaos across the country in an effort to "steal" the election in November, when he is expected to face off against former Vice President Joe Biden. Voters also want Congress to intervene.

Although many Democratic members of Congress this week have condemned Trump's actions in Portland and his promises to deploy agents elsewhere in the country, congressional lawmakers have so far failed to take any meaningful action and few Republicans have voiced any opposition.

"These results show that Trump's plan to use unidentified federal agents to suppress local protests is backfiring with the public. Voters oppose it, and they want their senators to act," Rahna Epting, MoveOn Political Action's executive director, said in a statement Friday. "Continued enabling of Trump by Senators McSally, Collins, and Tillis is likely to hurt them at the ballot box."

Epting added that "in this case, their political interests are aligned with the public interest, and they should do the right thing and join efforts in Congress to limit these abuses. When are they going to stand up to Trump's continued abuses of power? Voters have had enough."

Voters don’t like what @realDonaldTrump is doing and are fed up with @MarthaMcSally, @SenSusanCollins, and… https://t.co/rAc1QpTOvW
— MoveOn (@MoveOn)1595607825.0

In Arizona, nearly two-thirds of voters say they are following the situation in Portland closely; 52% of all respondents in the state oppose the use of unidentified federal agents to suppress local protests and 51% support Congress acting to stop it. Additionally, 55% back specific actions in a bill (S. 4220) introduced this week by Sen. Jeff Merkley (D-Ore.) that would restrict the use of federal officers to respond to protests.

Nearly two-thirds of Mainers are also paying close attention to Portland, and 56% of voters in the state both oppose Trump's use of federal agents in the Oregon city and want lawmakers to stop it. Even more Maine voters (58%) support elements of Merkley's legislation.

More than two-thirds of North Carolina voters are monitoring the federal crackdown in the Pacific Northwest. A majority of respondents (54%) say they oppose the agents suppressing protests there and 52% want Congress to end it. Even more (61%) say they support key parts of S. 4220.

MoveOn pointed out on Twitter Friday that of the 42 current co-sponsors of Merkley's bill, Collins, McSally, and Tillis are all missing. In fact, none of the Republican lawmakers in the GOP-controlled upper chamber—which adjorned for the weekend—have signed on to the legislation.

The advocacy group called the bill "a start" and urged Congress to go even further, investigating "this abuse of Trump's power."

That bill would be a start. We need Congress to investigate this abuse of Trump’s power (just as the DOJ’s Inspecto… https://t.co/nRwnREcplj
— MoveOn (@MoveOn)1595607834.0

"And we all need to do our part," the group added, "including by voting out Trump and his enablers."