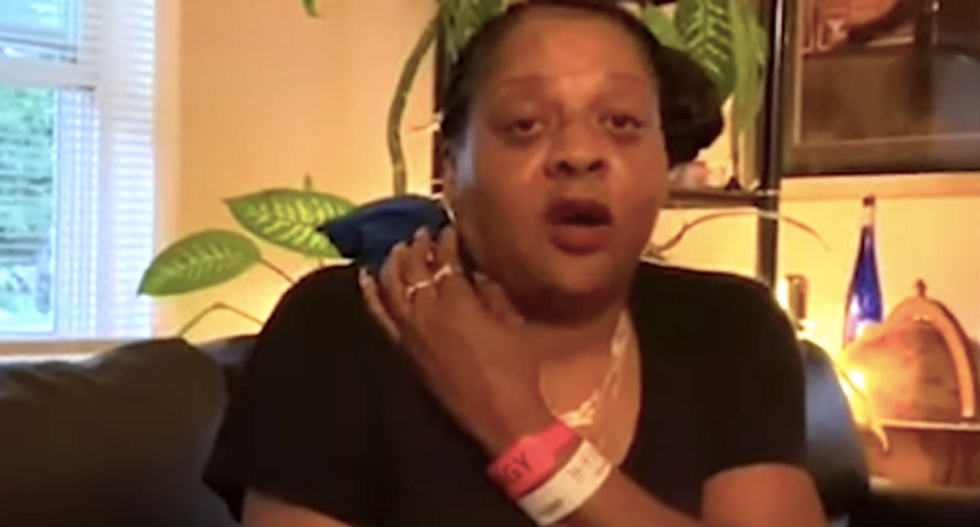 A Connecticut hotel clerk says she suffered a concussion after she was attacked twice by a couple of guests shouting racial slurs in a dispute over their room.

Chrystal Caldwell was working at the Mystic Quality Inn on Friday morning when a man from New York called the front desk to complain that his hot water wasn't working, reported the Westerly Sun.

The 59-year-old Caldwell, who's worked as a desk clerk at the hotel for seven years, offered to have the issue repaired or, if the couple preferred, they could move into another room -- and the man instead became angry, called her an "old monkey," and threatened to "kick [her] ass."

“The manager said, ‘I got this, I got it under control,’ so I turned around to go back to my desk because other people were checking out," Caldwell said.

The man then showed up in the reception area and attacked her, but bystanders pulled him off Caldwell.

She then went to get ice for her injuries, but the couple followed her and threw her against a wall, and Caldwell said the man then kicked her several times in the back before trying to "stomp" on her face.

"I was so fearful in that moment," Caldwell said in a video interview posted on YouTube. "I was concerned about my life."

Caldwell said the white couple, who appeared to be in their 20s or 30s, sneered that her life didn't matter and said she should be shot.

"I am almost 60, so for them to want to physically fight me, that was hard for me," Caldwell said. "This hurt me, this hurt my kids. I am an American citizen and I pay taxes, but they want to kill me for what? Because of the color of my skin?"

Caldwell and the husband-and-wife pair were all taken to a nearby hospital for treatment and then released, and police said the couple returned to their room, gathered their belongings and fled before officers could question them.

The New London State's Attorney plans to file an extraditable warrant to bring the couple back to Connecticut for questioning, and investigators have spoken with Caldwell about the incident.

Police said they had spoken to the couple by phone, but demonstrators showed up outside the police station to protest the slow pace of the investigation, which officers defended.

"These are significant accusations, and we are taking it very seriously," said Capt. Todd Olson, of Stonington police. "We are doing the best we can to conduct this investigation in a manner that will hold the individual or individual(s) responsible for what they did."