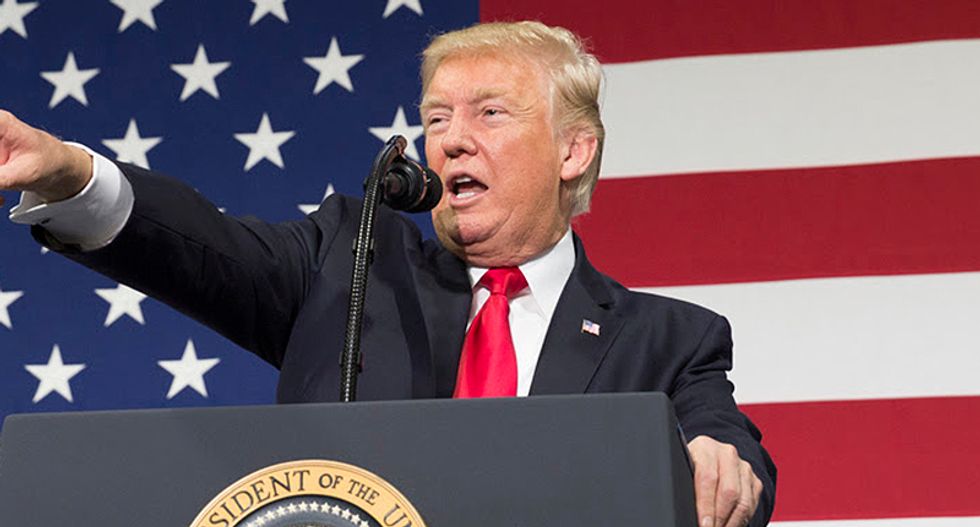 In a 7-2 decision that surprised many court observers, the Supreme Court on Thursday ruled that President Donald Trump cannot block a subpoena from the Manhattan district attorney seeking his tax returns.

Justices Neil Gorsuch and Brett Kavanaugh, who were nominated by Trump, both joined the majority in ruling against the president.

"Two hundred years ago, a great jurist of our Court established that no citizen, not even the President, is categorically above the common duty to produce evidence when called upon in a criminal proceeding. We reaffirm that principle," Chief Justice John Roberts wrote the decision.

The court sent the case back to lower courts for further proceedings. Axios described the ruling as "a stinging loss for Trump, who has fought relentlessly to keep these records secret."

holy hell even Gorsuch and Kavanaugh ruled against Trump in a resounding decision that essentially says he is NOT a… https://t.co/A6Ekl1qVgZ
— shauna (@shauna)1594304632.0

Unlike all of his predecessors since Richard Nixon in the 1970s, New York real estate mogul Trump refused to release his tax returns, despite promising to do so during his 2016 White House campaign.

Trump made his fortune a key component of that campaign, and his lack of transparency raises questions about his true worth and possible conflicts of interest.

Congressional investigations have raised questions about whether Trump has sensitive financial exposure to Russia, and also whether he has used questionable accounting loopholes to avoid paying taxes in the 1990s and 2000s.

Attorneys for Trump claimed the president enjoys total immunity during his time in office, and that this is necessary so he can concentrate on his work without being "harassed" by prosecutors or lawmakers.

During the proceedings, one of the attorneys even argued that the president could shoot someone on 5th Avenue in New York and not be prosecuted until he left office -- echoing a Trump 2016 campaign boast claiming that he would not lose any voters if he committed such a crime.

The cases could have long-term implications for the ability of lawmakers to scrutinize presidents, as well as test the claim by Trump's attorneys that a president is immune from criminal investigation while in office.

One of the cases before the Supreme Court relates to an investigation opened by the state of New York, and poses the specific question of the president's immunity from prosecution.

Such an unreported payment, made to obtain the silence of Daniels over an alleged affair with the billionaire Republican, would be a violation of state laws covering campaign finances.

Separately, two committees from the House of Representatives -- under Democratic control -- are seeking access to an array of financial documents from the same period in injunctions sent to Mazars as well as to Deutsche Bank and Capital One bank.

This second case raises issues over the balance between the executive and legislative branches of government.

Claiming to be the victim of a "witch hunt," Trump has opposed all of these requests but has lost each case at first instance and on appeal. Now the Supreme Court, which has a majority of conservative justices including two appointed by Trump, will have the last word.

At the hearing, which took place in May via telephone because of the novel coronavirus pandemic, the justices looked at each case differently.

In the case involving Congress, the four left-leaning justices defended the oversight role that the legislature has over the executive branch. But their five conservative colleagues, however, seemed inclined to consider certain requests for documents illegitimate.

In the New York case, however, there seemed to be little enthusiasm for arguments by Trump's attorneys that criminal proceedings against a sitting president violated the US Constitution.

"The president isn't above the law," said Justice Elena Kagan.

Law professor Stephen Vladeck at the University of Texas at Austin made a prediction about the cases on Twitter: a split result for the case involving Congress, and a large defeat for Trump in the New York case.

Yet even if the Supreme Court authorizes Mazars to hand over Trump's financial documents to New York prosecutors, there is no guarantee that the public will ever see them, said University of Michigan law professor Richard Lempert.

"Don't hold your breath awaiting more information about his tax returns," Lempert wrote on the Brookings Institute website. "Most likely, it will be a while before we know any details, and portions of his returns may remain forever secret."

Democrats are unified behind a push for a new round of COVID relief spending even as Republicans coalesce in complete opposition.

The polling has consistently shown that a large majority of Americans, including many Republican voters, support the $1.9 trillion package that President Joe Biden has pushed for. Democrats feel they have the wind at their backs, as the budget reconciliation process will allow them to pass the bill on a party-line vote, and they recently won two Senate seats in Georgia by running explicitly on more relief funding.

In a bizarre moment on Fox News Tuesday, right-wing personality Dinesh D'Souza has turned to a new conspiracy around the attack on the U.S. Capitol.

‘Oh come on’: Joe Manchin insists his opposition to first woman of color OMB nominee ‘is not personal’