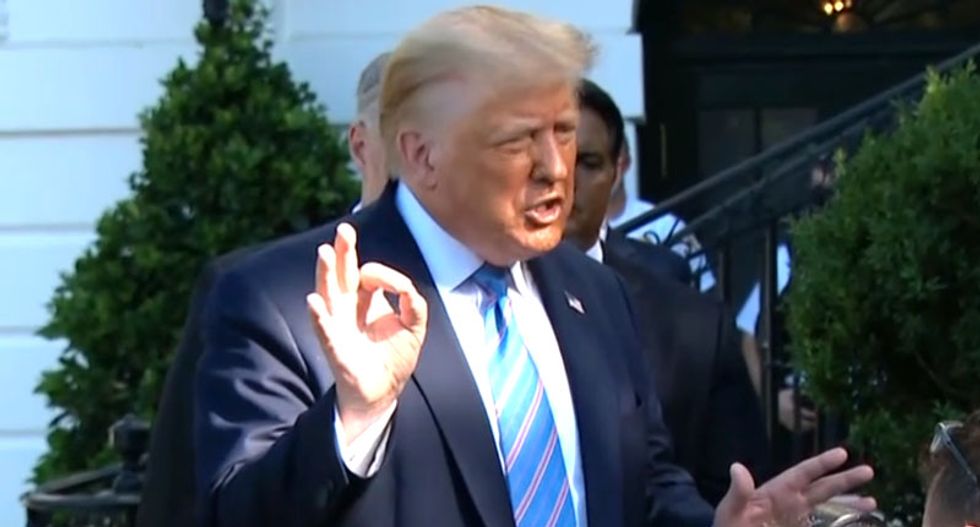 After snookering the endlessly gullible mainstream media last week with another of his endless "pivots," Donald Trump was back to his normal self — spreading conspiracy theories, making up ridiculous lies, not caring one single bit about the well-being of the people he was elected to serve — at Tuesday's so-called coronavirus briefing. His campaign is now heralding Trump's supposedly new understanding that the pandemic is a very serious thing, but Trump didn't act that way. He spent the entire event minimizing the dangers of the virus, pushing a hoax theory that there's a "cure" and insisting that states end lockdown restrictions that Trump believes are hobbling the economy and damaging his chances for re-election.

Since the very beginning of this pandemic, Trump has attached himself to the notion that it's the lockdowns, rather than the virus itself, that are causing the country's economic pain. As early as March, Trump was pronouncing on Twitter: "WE CANNOT LET THE CURE BE WORSE THAN THE PROBLEM ITSELF." Here we are in July, and he seems committed to the idea that simply "reopening" the country will bring the economy roaring back and create a rationale for his re-election, an outcome he would clearly sacrifice millions of lives to secure.

The problem is that Trump's core assumption — one shared by most of the Republican Party, which has embraced the "reopening" strategy nearly across the board — is wrong. What's destroying the economy is and always has been the virus. There will be no economic recovery unless the virus is contained, no matter how many bars are open for business.

Unfortunately, the mainstream media spread and reinforced this false narrative for months, making it impossible to have a meaningful public discussion about what it would it actually take both to protect public health and save the economy.

As economist Paul Krugman explained in his New York Times column on Monday, "the 'rocket ship' recovery Donald Trump promised has crashed and burned" and job growth "appears to have stalled or reversed, especially in states that were most aggressive about lifting social distancing mandates."

The reason is simple enough: You can reopen restaurants and bars all you want, but that won't restart the economy when most Americans are unwilling to go out and spend money, since doing so puts them and their families at obvious risk of severe lingering illness or death.

This dichotomy between saving the economy and slowing the viral spread was always false, as I argued early on in the pandemic. Far from destroying the economy, in fact, aggressive lockdowns coupled with extensive government aid — as well as other measures Trump rejected, like widespread testing and mask mandates — offered the only real hope of containing the virus quickly enough to get back to normal. Now it's much too late for that, and the economic pain is going to be dragged out far longer than it had to be.

As soon as Trump started pushing this false choice between the economy and public health, the mainstream media accepted and promoted that framework, turning a phony binary — that was never a choice at all — into common wisdom. Here are some of the most damning examples.

March 25, Bloomberg News: "The Coronavirus Trade-Off That Won't Go Away: Whether we like it or not, the choice between lives and the economy is already dictating events."

April 1, WBUR: "'Saving The Economy Versus Saving Lives?': An Ethicist and Economist Consider a Coronavirus Question."

April 10, New York Times: "Restarting America Means People Will Die. So When Do We Do It? Five thinkers weigh moral choices in a crisis."

May 1, San Francisco Chronicle: "Save the economy or save lives: Bay Area residents debate morality of shelter in place"

These efforts were largely in vain, however. Trump's phony choice got stuck in the public imagination, and Americans picked their sides without really stopping to ask if there was even a real conflict here.

Now, two full months into the "reopening" experiment, we have our answer: There was no way to bring the economy back to full strength without stopping the virus. We get to live in the worst of both worlds, with a cratering economy and a rapidly spreading pandemic that sets new records nearly every day.

Indeed, this false notion the media propped up for months, that there's some legitimate choice between the economy and public health, is still being invoked not just by Trump, but by the entire Republican Party. It's a useful myth for defending a coronavirus bill that falls far short of offering the financial aid needed to keep the economy on life support until the virus is defeated. (Which will have to happen by way of a vaccine created at record speed, since Trump failed so badly at containing it any other way.)

For instance, Sen. Ted Cruz, R-Texas, appeared on CBS on Sunday, denouncing an extension of unemployment benefits by arguing that "we have an absolute economic catastrophe" and "we have got to get America back to work." He went on to insinuate that restaurant employees who are on unemployment due to the pandemic are simply too lazy to return to work.

This is, of course, complete honking nonsense. It's not just that these folks have a legitimate fear of getting the coronavirus, although that's true. But there's also no good reason to go back to work, when most potential customers are extremely unlikely to risk their lives by going out to eat.

Cruz and his fellow Republicans don't actually care about an economic recovery, of course. If they did, as Krugman points out, they would have "wanted to sustain consumer purchasing power until wages recovered." There is literally only one way to do that: Robust unemployment benefits and other financial assistance. Reopening won't recover wages — businesses won't be able to pay their employees if they don't have customers.

Republicans clearly don't care if the economy craters, likely because they learned from the 2008 crash that wealthy Americans and corporations will be just fine, shielded by the government bailouts they won't extend to ordinary working people. This entire song-and-dance about "getting America back to work" is about kicking people off unemployment, even if returning to work means making significantly lower wages than they did before the pandemic — if they get wages at all. It's class war, full stop.

But this reality is still being obscured because too many gullible reporters and editors spent months propping up the narrative that there was some kind of ethical or philosophical choice between saving the economy and stopping the virus.

It was a seductive lie, no doubt. Debating an intriguing ethical dilemma is fun! Plus, that false dichotomy created a conflict between Team Economy and Team Human Life, and everyone knows that ratings and clicks are driven by conflict.

It felt like being a spoilsport to be the person who pointed out that there was no conflict at all, and that the only way to save the economy was to contain the virus. As things turned out, by spending months "debating" this alluring but imaginary ethical dilemma, the media missed the real story, which was that Trump and Republicans did everything they could to both tank the economy and spread the disease.

It's probably too late for this, but there's a lesson in this for journalists: View all frameworks offered up by politicians with intense skepticism, especially coming from those who are known to be pathological liars. The task here was clear enough: Expose Trump's bogus narrative, rather swallowing and regurgitating it. By uncritically embracing Trump's false choice, the media gave cover to Republican politicians who made the entire situation worse, driving the pandemic to every corner of the nation and driving the economy deep into the ditch. Now the whole country is in a tailspin, and there's no obvious way to pull out of it.

In 2007, Donald Trump made an appearance at a World Wrestling Entertainment tournament in which he fought a proxy battle with longtime WWE CEO Vince McMahon.

Essentially, the two men had other wrestlers fight one another on each man's behalf -- and whichever man's wrestler won the match would be allowed to shave the other man's head.