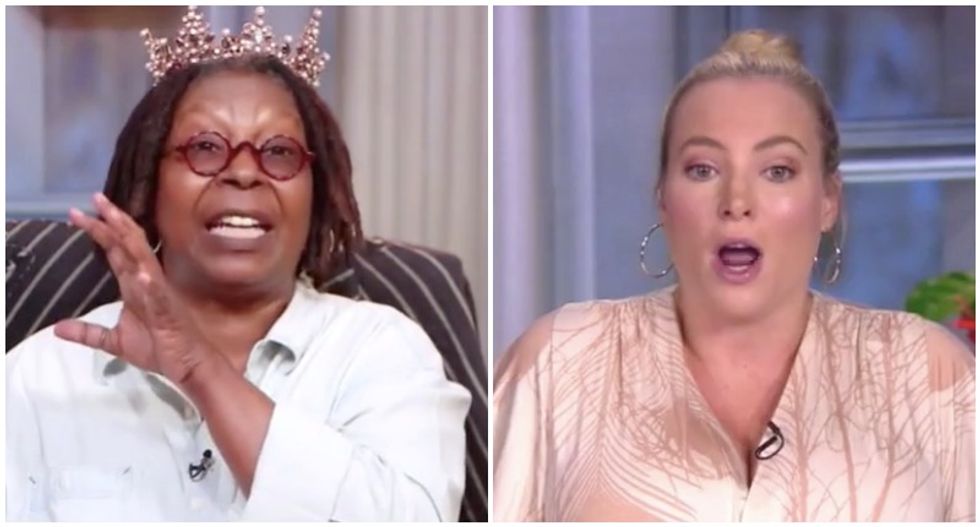 "The View" co-hosts Whoopi Goldberg and Meghan McCain clashed over protests and marches during the coronavirus pandemic.

McCain complained that medical experts had not condemned Black Lives Matter demonstrations and a Pride march in Chicago, and she said that undercut their credibility -- especially with conservatives who disapprove of those events in the first place.

"I don't trust Dr. [Anthony] Fauci in the way that I did, and we have conversations on this show about people wearing masks and being responsible, and we're all in agreement on that," McCain said, "and then I see a giant Pride march in Chicago, which is great that people are out marching in any other time other than a pandemic right here, and we're not supposed to be this close together. I'm not supposed to be within six feet of people."

"The narrative continues to confuse me," she added. "Republicans are the devil, Fox News is the devil, but protesters for Pride and protesters for Black Lives Matter, it's fine, and the pandemic doesn't exist."

Goldberg and co-host Joy Behar shook their heads in disagreement, saying no one had been saying that, and McCain continued.

"I'm the only conservative on this show, and I leave this place and all I do is pretty much consume conservative media, so I was just trying to explain what conservatives are seeing, and as much as you want to trash Fox News," she said, "Tucker Carlson has the highest numbers in Fox News history right now, because he's saying what I am saying right now. It's a big conversation, and we can forget about it and talk about the Lincoln Project and say vote all Republicans out, but it's making the culture war divide even further, and maybe that's what we want."

Goldberg finally got a chance to speak.

"We said it about the beaches in Florida, and, you know, sort of shamed people into making changes. We have talked about the fact that everybody has to get on board to stop the spread of this thing. We said it to the marchers, we said it to everybody. Nobody is making a distinction."

McCain agreed the show's panelists were largely on the same page on coronavirus safety measures, but she said Republicans are losing trust in Fauci and Dr. Deborah Birx because they had not condemned the protests as dangerous.

"All the hosts on this show are on the same page," McCain said, "but I do not think Americans are on the same page, and when someone like me is frustrated and when it feels like the people in place, and places of power like Dr. Fauci are not going on TV and screaming bloody murder about the dangers of this, and we're seeing spikes everywhere, I understand why there's frustration."