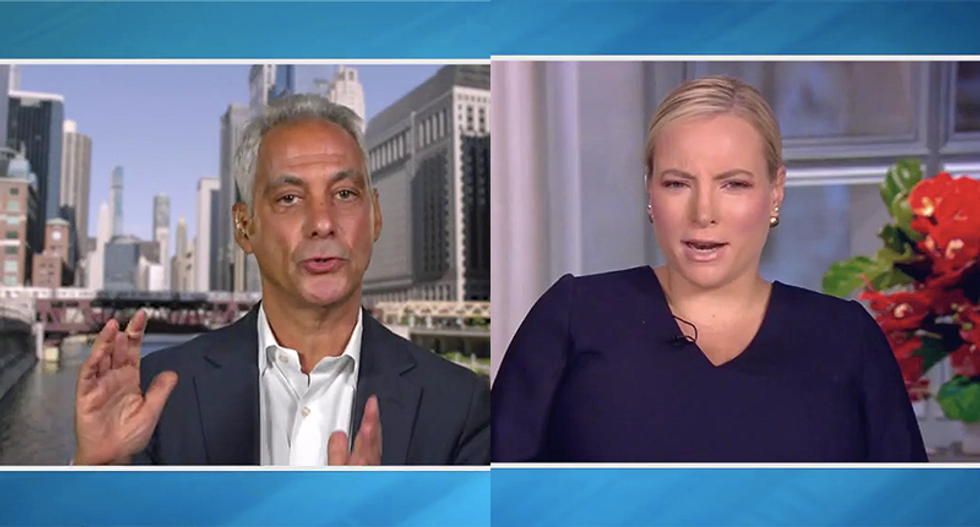 The View's Meghan McCain struggled in a debate with former Chicago Mayor Rahm Emanuel when it came to the city protests being exploited by President Donald Trump.

McCain accused Democrats of downplaying the violence. Meanwhile, Fox News is calling graffiti on courthouses an example of violence. She asked Emanuel if Democrats are defending the protesters, noting that after there were incidents of violence, "I'm out."

"If you are against violence and you don't want your neighborhood looking like Portland, I think that's a really dangerous narrative for Democrats," said McCain. "Do you agree with me or disagree with me, and what do you think of the fracture between the left and the right on this?"

As a fact-check, Portland hasn't been destroyed by violence. There's approximately a one-block area of the city in which the protests are taking place.

"Meghan, here's what I would say," began Emanuel. "You say protesters -- there are moms out in Portland. There are people legitimately raising questions --"

"Well, that's what I'm saying. I wouldn't paint a broad stroke, is my short answer," Emanuel continued. "There are people trying to hijack legitimate protesters and create violence. And, I think, the response from the federal government shouldn't be making Antifa the face of the protest. Let the local law enforcement take the lead, and if they need assistance, they'll ask for it, just like every other situation going back. And in this situation, understand the protesters that are asking America to live up to the promise of America and know that others, individuals, not a lot, but are trying to hijack these protests for their own violent needs and we need to separate them rather than paint in broad strokes."

"There are forces, Democrats have to be honest, that aren't here for peaceful protest, and unfortunately, the voices of the peaceful ones are now being receding, and the more violent voices are coming forward," said Emanuel. "I think in a way that President Trump, if I may say, it may be a bit Machiavelli, wants to see happen."