Trump campaign workers ducking wearing masks over fears of mockery: 'You get made fun of' 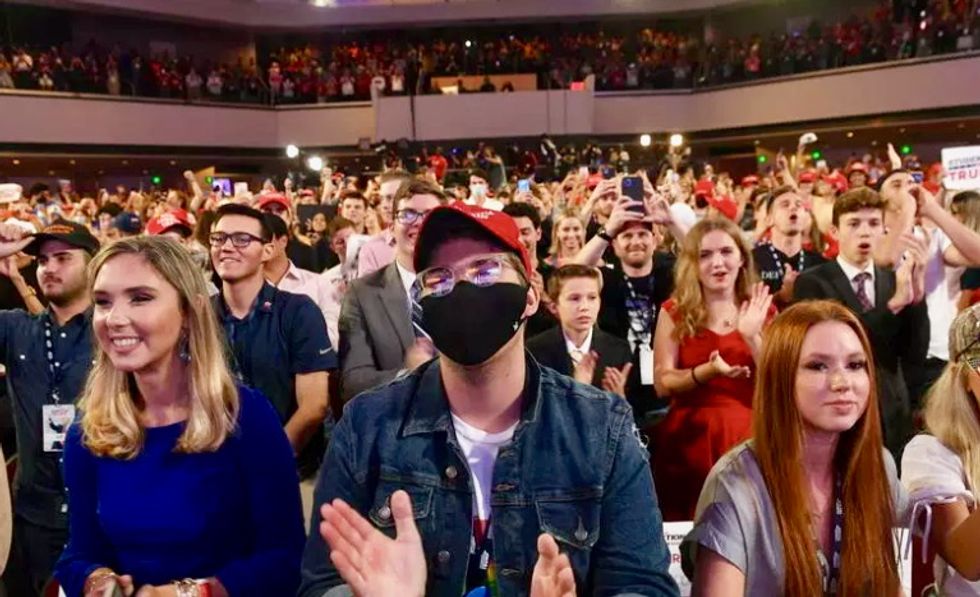 Supporters listen as US President Donald Trump speaks during a Students for Trump event at a mega church in Phoenix, Arizona in June; mask wearing and social distancing are ideas that have been scorned by many on the political right in the US SAUL LOEB AFP/File

According to Politico, Trump campaign officials at the re-election headquarters in Arlington, Virginia are too embarrassed to follow the president's own CDC guidelines about wearing masks and practicing physical distancing — because the president himself has done so much to politicize the coronavirus pandemic.

"The campaign’s headquarters — located on the 14th floor of an Arlington, Va., office building that shares space with multiple businesses — is normally packed with dozens of staffers, often sitting in close proximity to conduct phone calls and other urgent campaign business, said three people with knowledge of its operations," wrote Dan Diamond. "But the office was shut down for its first deep cleaning in weeks after a senior campaign official tested positive for the virus. The decision to conduct the cleaning came after two months of flouting the Trump administration’s own public health guidance: There are no face coverings or temporary barriers between desks at headquarters, and leaders have limited efforts to implement social distancing."

One person at the headquarters told Politico, "You get made fun of, if you wear a mask. There’s social pressure not to do it." Others have said that campaign staff are discouraged from even telling their colleagues if they were exposed to the virus because of the negative press attention surrounding the advance staffers in Tulsa, Oklahoma who tested positive ahead of Trump's rally. Instead, these staff are encouraged to "quietly self-quarantine" while keeping it a secret.

Local officials have been furious about the public health hazard and called on Democratic Gov. Ralph Northam to crack down on them, but according to one source, "The governor’s office did not want to get bogged down in a political fight ... They basically ducked a fight with the administration over this."