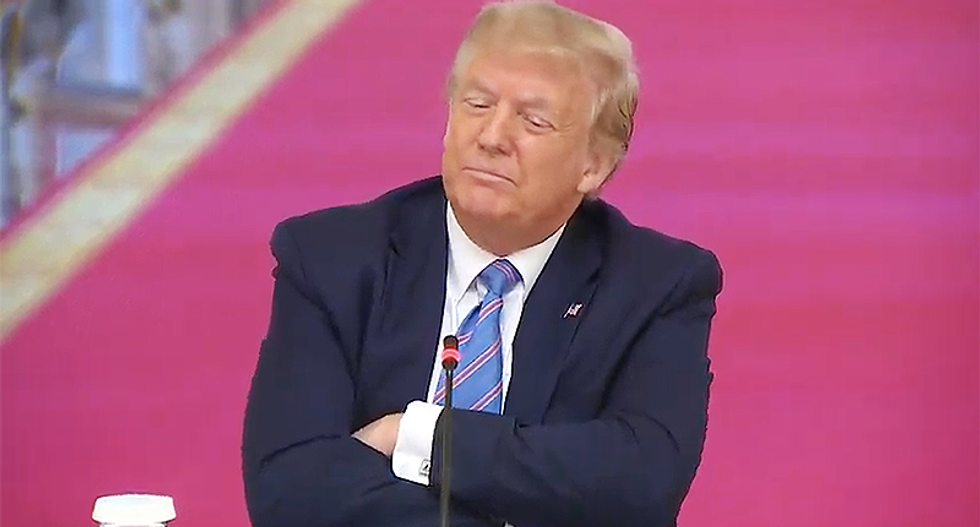 On Tuesday, the Daily Mail reported that President Donald Trump declined to wear a mask to a fundraiser at his Washington, D.C. hotel — hours after urging the American people to wear masks in public.

"Video emerged late Monday night of the president walking through Trump International Hotel, which is less than a mile from the White House, as he participated in a roundtable with supporters of a joint fundraising committee," reported Katelyn Caralle and Nikki Schwab. "Also in tow, not adhering to D.C. masks guidelines, were Republican South Carolina Senator Lindsey Graham, Chief of Staff Mark Meadows and the president's personal attorney and former Mayor of New York City Rudy Giuliani."

"The video specifically showed a moment the president, and his entourage, stopped to speak with Madison Cawthorn, the 24-year-old who won the Republican primary for Meadows' seat in North Carolina's 11th district, which he vacated when he joined the administration," continued the report. "The president made an introduction between Cawthorn and Giuliani, who had a black mask pulled below his chin during the interaction and jokingly said 'Don't touch me' when the candidate approached him for a handshake."

Trump has spent months refusing to wear a mask in public, which his supporters have broadly taken cues from and also gone maskless. On Monday, Trump attempted a messaging shift, tweeting an image of himself masked and calling the act "patriotic."