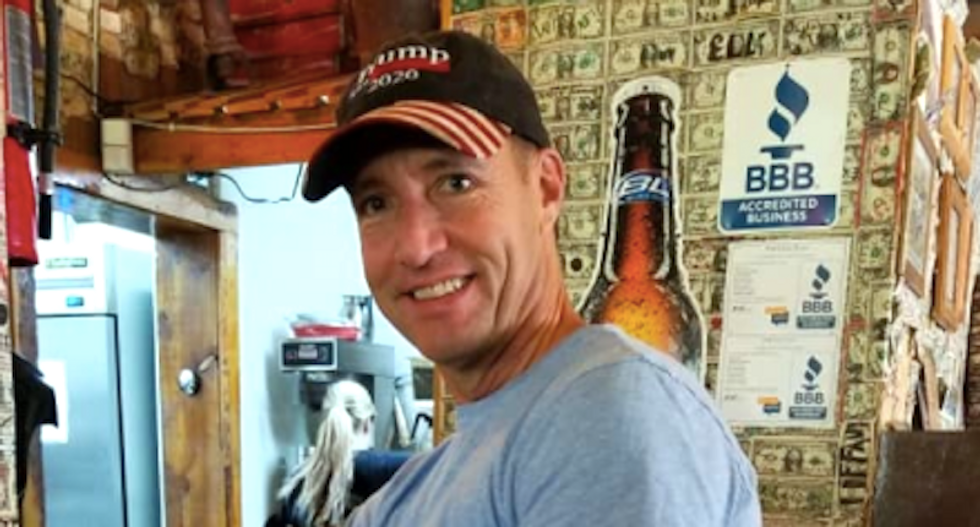 A Minnesota man complained that he was kicked out of a restaurant for supporting President Donald Trump -- but the owners say he was banned for being a jerk.

Greg Aberle told the conservative Alpha News website that he was banned from Porter Creek Hardwood Grill for wearing a "Make America Great Again" hat, saying he's spent about $90,000 at the Burnsville eatery over the course of a decade, reported Bring Me The News.

“After being a solid long-term customer there for nine years with myself and my circle of friends, they decided to ban me from ever returning a few weeks back,” Aberle told the conservative site. “[My girlfriend] and I have never done a thing to warrant getting kicked out of that place, aside from wearing Trump hats."

Aberle complained in a one-star review on the restaurant's TripAdvisor page that a manager pulled him aside during a visit in June to say the president wasn't popular there, but he kept going back to Porter Creek wearing his Trump hat -- until employees "got in his face" during an argument.

He complained to the restaurant's co-owner, John Sheehan, who asked him not to come back and then disputed Aberle's account on Facebook.

"While we have appreciated his patronage over the years, there has been a clear stress on the restaurant due to his presence," read the post, which was signed by Sheehan. "When asked recently, our staff and management felt Mr. Aberle was an extremely difficult guest that affected their work life and the dining experience of guests in our restaurant, and most felt he should not be welcomed back."

The restaurant owner added that Aberle has been a problem for years, saying he sometimes refused to wear shoes in the restaurant or bathroom and brought in food from home or other restaurants.

The banned customer has been especially disrespectful of social distancing and other coronavirus safety guidelines, according to the restaurant owner.

Aberle posted text from what he said was a letter from the restaurant's attorneys threatening to sue for defamation, and he shared text purportedly from his attorney threatening to take the story to Fox News host Tucker Carlson or MSNBC host Rachel Maddow.