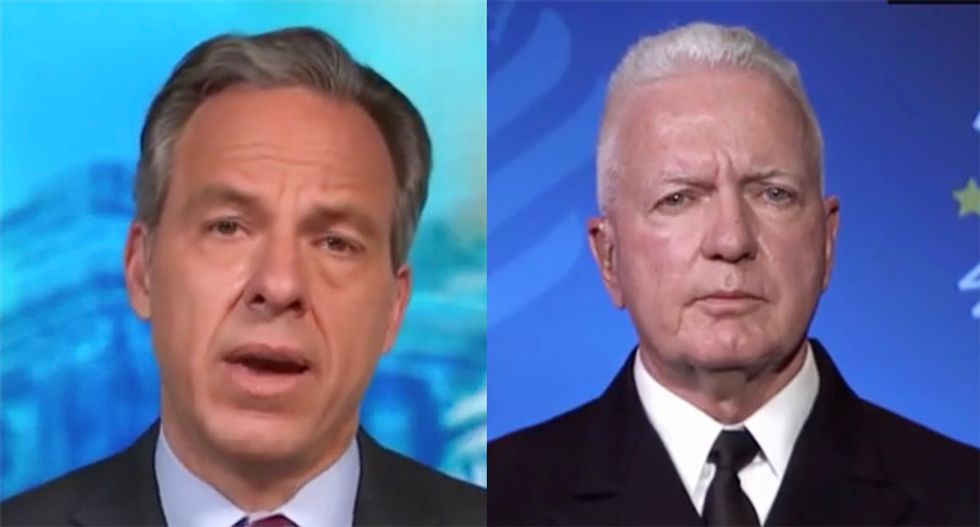 On CNN's "State of the Union," host Jake Tapper put one of Donald Trump's top health advisers continually on the spot by pressing him on why the administration hasn't done everything within its power to get COVID-19 testing up to speed as the health crisis continues unabated.

Speaking with Admiral Brett Giroir, Tapper confronted the Assistant Secretary for Health over the fact that the public is still unable to be tested and get results quickly -- telling him it is late July and little progress is being made.

"Are you happy where testing is right now?" Tapper asked.

"I'm never going to be happy until we have this under control and we're going to continue to push every single day to improve the testing, the type of testing that we have in the rapidity of turnaround," Giroir replied. "Where we see the growth is in point of care, we'll have about 50 million tests available in August, about 65 million in September"

"Let me ask you, the Harvard Institute of Global Health said that the U.S. should be conducting 3 million to 5 million tests per day. We're doing, as you noted, less than 800,000. Experts note that the Trump administration has not fully activated all of the labs available including hospital labs, commercial nonclinical labs, academic labs, veterinary labs. I know that you are saying that things have improved a lot and they have but you concede they're not where they need to be. Why is the Trump administration not doing everything it can to get testing where it needs to be?" the CNN host asked.

With Giroir protesting that the administration has been focused on increasing testing for "at least six or eight weeks," Tapper pressed him once again.

"Harvard is saying for months you need millions of tests a day and five veterinary labs okayed for this is not the same thing for every lab in the United States able to do this up and running and turning around the tests so that week can find out where the virus is, identify it and isolate it," the CNN host explained. "Here's a question: when I say you haven't done everything you can, this is what I mean. Has the Trump administration forced federal labs to hire more workers, buy more equipment? Has President Trump invoked the Defense Production Act to get every commercial lab up to speed? Has the Trump administration invoked the Defense Production Act to get contact tracing up to speed? Millions of unemployed Americans could be at labs and doing contact tracing in a Manhattan Project like effort."

"That's what we have been doing led by the vice president of the United States meeting multiple times a week and literally 24/7 since this started," the admiral protested. "We invoked the Defense Production Act numerous times, invested in multiple different technologies. Every day I have a working group looking at how to invest. That's something we do and will see more investments coming later today. "