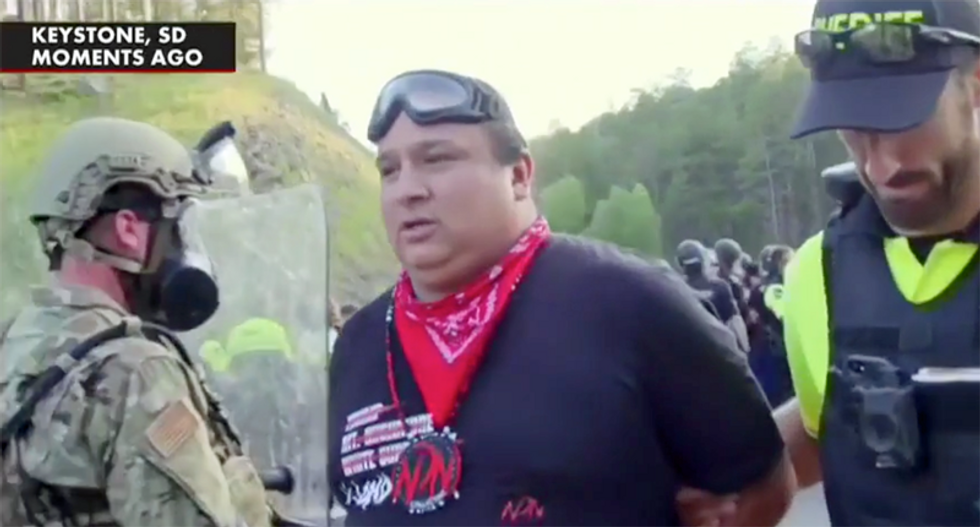 The protesters argued that it is their land after the Ft. Laramie Treaty of 1868, which was ratified by the U.S. Senate.

The Black Hills of South Dakota, where Mount Rushmore is located, was among the lands the tribes received to bring about an end to Red Cloud's War, which is also known as the Bozeman Trail War.

MSNBC's Cal Perry was interviewed by Ali Velshi about what he saw.

"It is their land according to the U.S. government, according to the United States Supreme Court, which ruled in 1980 that the original Laramie Treaty of 1868 was not held up by the U.S. government, the U.S. government did not hold up their end of the bargain," Perry reported. "That treaty ended a lot of the conflict in the northwestern part of this country, it wasn't even fully formed at that point, but these Black Hills were given to the Lakota people, and it was less than ten years later when people searching for gold came across these hills and the Lakota people were starved and killed and run out of these hills, and ever since then they've been on reservations and they've been fighting for their land back."

"So you had this very ugly and frankly, very sad scene where, as folks were being taken away and they were under arrest, you had Trump supporters yelling at them, 'Go home, go home!' and you had these Native American protesters, activists yelling back, 'This is my home, this is my land!' and I think there's just not a common understanding between the two groups of each other," Perry explained.