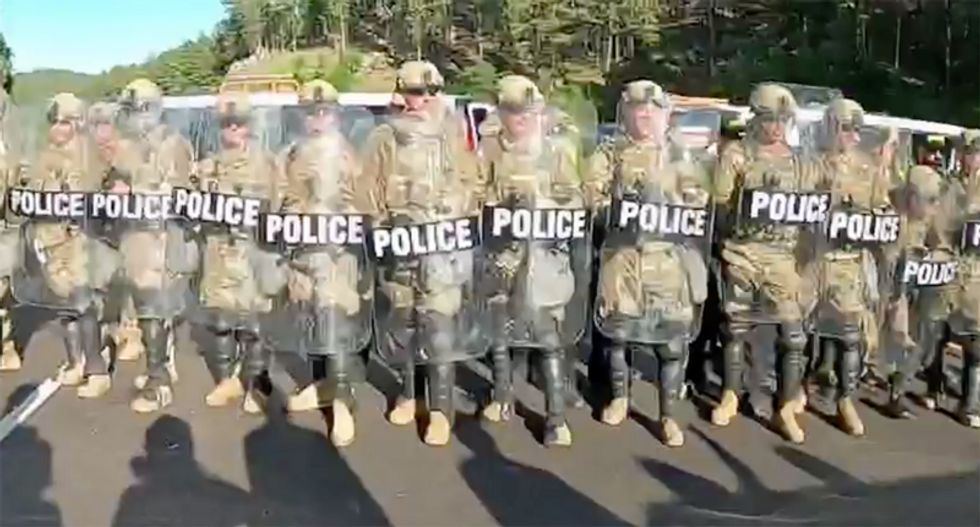 Police in camouflage fatigues and riot gear faced off against protesters in South Dakota on Friday evening.

"More than 100 protesters gathered on a highway leading to Mount Rushmore on Friday ahead of President Donald Trump’s speech at the monument," Indian Country Today reports. "Native women in ribbon skirts created a line across the highway, behind them members of NDN Collective, a nonprofit Native advocacy organization, parked white vans across the road."

Officers have threatened arrest protesters who do not disperse, in violation of the Ft. Laramie Treaty of 1868, which was ratified by the United States Senate.

Nick Tilson of NDN Collective said the group had "reclaimed the road."

"We don’t need them to give us permission to do this on our land; we intend to stay here indefinitely throughout the night," he explained.

All people staying to get arrested are told to meet in the middle. One of the military lines has moved to the side. https://t.co/IYPRC2foTO
— Erin Bormett (@Erin Bormett) 1593824040.0

"The Black Hills are part of the Fort Laramie Treaty of 1868, and the country’s highest court ordered compensation in the millions of dollars to the Lakota for the illegal seizure of the Black Hills, an offer the Lakota have refused for decades. They instead want the Black Hills returned to tribal authority," Indian Country Today reminded.

I was showing how media is blocked by military from the arrests, and a sheriff’s department employee responded to a… https://t.co/7s4NCriVIn
— Erin Bormett (@Erin Bormett) 1593824773.0

Protesters put three vans in the middle of one of the two entryways into the park and disabled them which has stopp… https://t.co/OkH4MTuDZa
— Acyn Torabi (@Acyn Torabi) 1593823088.0